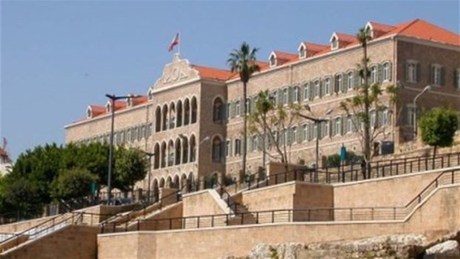 European diplomats reportedly told political figures in Lebanon their government is “wasting time” and that PM Hassan Diab made a “huge” mistake by picturing the French Foreign Minister as “ignorant” regarding his government’s reforms, al-Joumhouria daily reported on Tuesday.

“There is a very big mistake made by Prime Minister Hassan Diab when he tried to endorse Minister Jean-Yves Le Drian in the ignorant position," European diplomatic sources told the daily.

"He could have avoided making this mistake. He could have taken Le Drian’s visit as an opening for investment and assistance for Lebanon,” they added.

The diplomats emphasized that Diab's government “refuses to listen” to international and local warnings against Lebanon’s “permanent fall” due to failed efforts to enforce reforms.

“On the contrary, it continues to pursue paths far from reform. There is no trust in the government,” they reportedly said.

“No foreign aid to Lebanon unless its government undertakes real reforms. All that the government has been doing since its formation is nothing more than a waste of time," al-Joumhouria quoted the sources as saying.

don't worry, Diab will still get his 1000 page book on his achievements as Prime Minister

"The world does not understand me. If only they would listen. It`s all a misunderstanding. Let me explain better." Nice one Diab! You cant fool seasoned western diplomats and economists.

I believe Lebanon will be better off when the constitution will change, and equal (all inclusive,also political) rights in government positions will be implemented for all Lebanese ,meaning religious leaders have nothing to do with politics and government positions should not be allocated based on religious background.The constitution is the root cause of the civil war(s); subsequently militia leaders will become obsolete, Lebanese people do not feel belonging to one nation, therefore they were never united . Lebanon of today is stil a product of the Ottoman feudal era, based on divide and rule approach, feudal systems ensures that the population is dependant of certain families and the latter are controlled by foreign powers. Since the independence of Lebanon all attempts to govern and manage were window dressing.

Amazing! These morally corrupt Lebanese officials are so stupid they still think they can fool the world.
“ Ali Baba and the forty thieves gang”.

of course, diab has claimed that they have done 97% of what they had to do, and there is some war on corruption going on (according to him), and apparently a war on reforms, since they seem to be combatting them.