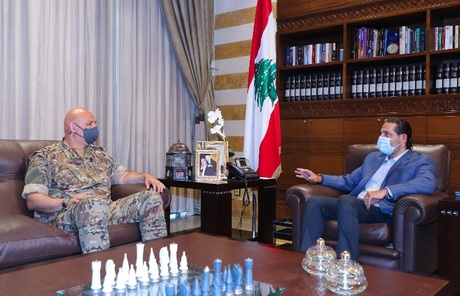 Ex-PM Saad Hariri held talks Tuesday at the Center House with the country’s top security chiefs, four days ahead of the verdicts that will be issued by the U.N.-backed Special Tribunal for Lebanon.

It said the discussions tackled “the security situations in the country and the efforts that the security and military forces are exerting to preserve security and stability in the various regions.”

The STL will give its verdict Friday on the 2005 murder of former premier Rafik Hariri, Saad’s father.

Four alleged members of Hizbullah are on trial in absentia at the court in the Netherlands over the huge Beirut suicide bombing that killed Hariri and 21 other people.

The judgment harks back to an event that changed the face of the Middle East, with Hariri's assassination triggering a wave of demonstrations that pushed Syrian forces out of Lebanon after 30 years.

Hariri's son Saad has said that he looks forward to a "day of truth and justice" while urging calm and patience.

According to the Jerusalem Post newspaper , Hezbollah looted Lebanon and it will cost $93b. to bail it out .

Every year , the terror group syphons around a billion dollars from the State coffers on top of the tax free smugglings. Add this to the political parties lootings and it explains the humongous debt.

I advise the Lebanese people to be able to change the face of their country completely and declare a state of absolute equality before the law to all sectors and religions in such a way that the religious definition is secondary to the citizenship status and goals of all citizens without religious and narrow interests
Lebanon could be the Switzerland of the Middle East in terms of human capital beyond being a beautiful country.

Hariri is pathetic as he and his followers will burn a few tires and claim fowl on Friday. By the evening they will get the old arghili out and its business as usual. Still perplexes the mind of how Saad is hos fathers son?