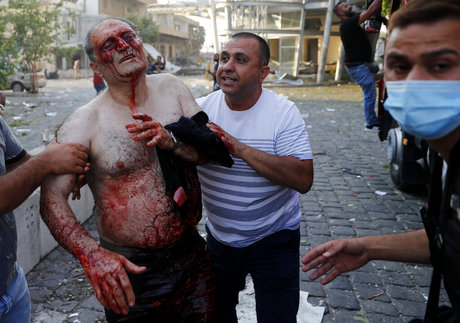 Countries in the Gulf paid tribute to victims of the two powerful blasts that rocked Beirut Tuesday as Qatar said it would send field hospitals to support Lebanon's medical response.

Sheikh Tamim wished "a speedy recovery for the injured," QNA reported, adding that he "expressed Qatar's solidarity with brotherly Lebanon and its willingness to provide all kinds of assistance."

Field hospitals would be dispatched, the report added.

Elsewhere in the Gulf, the United Arab Emirates' Minister of State for Foreign Affairs Anwar Gargash tweeted that "our hearts are with Beirut and its people."

He posted the tribute alongside an image of Dubai's Burj Khalifa, the world's tallest building, illuminated in the colors of the Lebanese flag.

"Our prayers during these difficult hours are that God... protects brotherly Lebanon and the Lebanese to reduce their affliction and heal their wounds," he wrote.

Gulf countries including Qatar and the UAE maintain close ties with Beirut and have long provided financial aid and diplomatic assistance to mediate Lebanon's political and sectarian divisions.

Bahrain's foreign ministry urged its nationals in Lebanon to contact the ministry's operations center or Manama's representative in Beirut, while Kuwait ordered its citizens to take extreme caution and stay indoors.

It also asked those in need of assistance to contact their embassy.

On June 27 1989 the foreign ministers of Hungary and Austria cut the barbed wire separating their borders and people flooded from Hungary to Austria and to freedom. This very simple gesture led to the collapse of the Soviet Union. Today Israel is offering to take care of half of the Lebanese injured in the blast. If the families take their wounded across the border for care in Israel, this will change the entire Middle East. Start Crossing, and make this Disaster the start of a new Lebanon!

The Gulf comes to Lebanons aid as usual thank you to all the GCC nations!
Iran is not too far behind they are sending carpets and cigarettes....