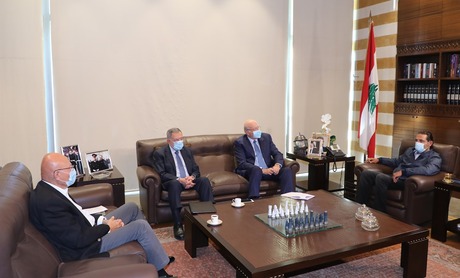 "The former prime ministers extend their heartfelt condolences to the families of the martyrs, hoping that God Almighty will have mercy on their souls, heal the wounded and help all those afflicted by the terrible and unprecedented explosion that hit Beirut," they said in a statement after a Center House meeting.

"The steadfast city of Beirut that has been suffering for more than four decades from endless chains of destruction and abuse is hit by a catastrophe, which could have been avoided if it was not for the absence of leadership, insight, and will," they added.

"This had led earlier to a major breakdown in the confidence of the Lebanese people in the government and the presidential tenure, as well as in the trust of Arab and international communities," the ex-PM went on to say.

They added that they find it necessary to ask the United Nations or the Arab League to form an international or Arab investigation committee composed of judges and investigators "who are professional and impartial to start their duties in uncovering the circumstances and causes of the catastrophe that occurred in Lebanon."

"At the same time, the former Prime Ministers call on all the agencies at the port to work together to preserve the scene of the crime and to ensure that it is not tampered with," they said.

These four should feel ashamed that this shipment arrived, got stored and was not addressed properly during their tenures. Duties of government procedures and officials need to be thoroughly reviewed to ensure that none of the ministers and prime ministers can escape from their responsibilities.
Maybe better to put all for of them also under house arrest until all these investigations are done.

Above is a picture of the root cause for Lebanon's misery. Someone needs to storm that meeting and drag the SOBs to the streets and hang them all for everyone to see...

Sorry S.O.S to correct you, they are very COMPONENT crooks!!!

why are these four crooks still alive and hung in the street???

They can all go to HELL!

The Health Minister just said that 335 Covid-19 cases were found on Tuesday/Wednesday. That's how you know that they're lying. Wake-up, people. Covid-19 is a hoax. It is a hoax in Lebanon and a hoax everywhere else. 23 people died of Covid in Lebanon, out of 5 Million! How many people die of the seasonal flu every year? Do you really need to destroy your economy more than it's already destroyed with stupid lockdowns?

""The steadfast city of Beirut that has been suffering for more than four decades from endless chains of destruction and abuse is hit by a catastrophe, which could have been avoided if it was not for the absence of leadership, insight, and will," they added."

You all belong to the same Hereditary kleptocracy.

We have to end this now, no more any political Party that can be grounded in any kind of religion. We just want the government to serve us, no matter what your personal belief is. It does not work anymore, maybe it did 25- 40 years ago.
We need a new kind of political system or none.
Maybe the military should take control, until we can make a new constitution.
New Political parties, that serve the people and not the other way around.