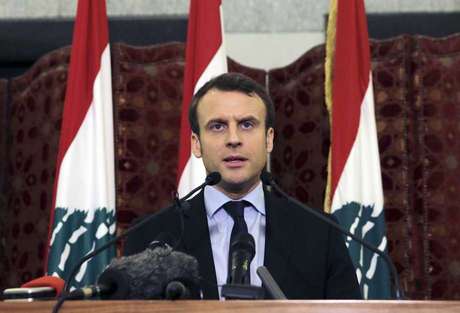 French President Emmanuel Macron visited shell-shocked Beirut Thursday, pledging support and urging change after a massive explosion devastated the Lebanese capital in a disaster that has has sparked grief and fury.

"Lebanon is not alone," he tweeted on arrival before pledging Paris would coordinate international relief efforts after the colossal blast killed at least 137 people, wounded thousands and caused billions of dollars in damage.

But Macron also warned that Lebanon -- already mired in a deep economic crisis, in desperate need of a bailout and torn by political turmoil -- would "continue to sink" unless it implements urgent reforms.

Macron's visit to the small Mediterranean country, France's Middle East protege and former colonial-era protectorate, was the first by a foreign head of state since Tuesday's unprecedented tragedy.

Two days on, Lebanon was still reeling from a blast so huge it was felt in neighbouring countries, its mushroom-shaped cloud drawing comparisons with the Hiroshima atom bomb.

"Apocalypse", "Armageddon" -- Lebanese were lost for words to describe the impact of the blast, which dwarfed anything the country had experienced in its violence-plagued history.

The provisional death toll stood at 137 but, with dozens missing and 5,000 wounded, the number of victims was expected to rise as rescue workers continued to comb through the rubble.

Offering a glimmer of hope amid the carnage, a French rescuer said there was a "good chance of finding... people alive", especially a group believed to be trapped in a room under the rubble.

"We are looking for seven or eight missing people, who could be stuck in a control room buried by the explosion," the colonel leading a rescue team told Macron as he surveyed the site.

Paris has spearheaded international mobilisation in support of Lebanon, where flights carrying medical aid, field hospitals, rescue experts and tracking dogs have been arriving since Wednesday.

Beirut's governor estimated up to 300,000 people may have been left temporarily homeless by the destruction, which he said would cost the debt-ridden country in excess of three billion dollars.

According to several officials, the explosion was caused by a fire igniting 2,750 tonnes of ammonium nitrate fertiliser stored for years in a ramshackle portside warehouse.

Even as they counted their dead and cleaned up the streets, many Lebanese were boiling with anger over a blast they see as the most shocking expression yet of their leadership's incompetence.

"We can't bear more than this. This is it. The whole system has got to go," said 30-year-old Mohammad Suyur as he picked up broken glass in Mar Mikhail, one of the worst-hit city districts.

Many questions were being asked as to how such a huge cargo of highly explosive material could have been left unsecured in Beirut for years.

Prime Minister Hassan Diab and President Michel Aoun have promised to put the culprits behind bars, but trust in institutions is low and few on Beirut's streets held out hope for an impartial inquiry.

The disaster could reignite an unprecedented cross-sectarian protest movement that erupted last October and had looked briefly like it could topple what activists consider a hereditary kleptocracy.

The euphoria faded as real change failed to materialise and the combination of economic hardship and the coronavirus pandemic left the revolution in tatters.

But since the disaster, social media has again been rife with calls for a new push to remove Lebanon's widely reviled political leaders.

"Lebanon's political class should be on guard in the weeks ahead," Faysal Itani, a deputy director at think tank the Center for Global Policy, wrote in The New York Times.

"Shock will inevitably turn to anger."

The group Human Rights Watch supported mounting calls for an international probe into the disaster as the only credible option.

"An independent investigation with international experts is the best guarantee that victims of the explosion will get the justice they deserve," the watchdog said.

In France, prosecutors on Wednesday opened a probe into the blast over injuries suffered by 21 French citizens.

Besides the international emergency effort, the aftermath of the terrible explosion has yielded countless uplifting examples of spontaneous solidarity.

Much of the cleanup was being handled by volunteers who improvised working groups, bringing their own equipment and making appeals for help on social media.

"We're sending people into the damaged homes of the elderly and handicapped to help them find a home for tonight," said Husam Abu Nasr, a 30-year-old volunteer.

"We don't have a state to take these steps, so we took matters into our own hands."

Lebanese people wake up, the country got its independence almost 80 years ago, but the people did not, they have chosen to remain subordinate to their feudal "zaim" and remained dependent to not say slaves for these warlords. Unfortunately the constitution , based on religion rights , legitimise the existence of these "zaim". Constitution is not holy and should be changed.
Some religious leaders are campaigning for neutrality, in order to get neutrality ensure first equality between the people. Government positions should not be allocated based on religion.

Macron visits the site and spends more time there than Clown and his Kizb advisors who surrounded his quick visit. When a leadr of a soverein nation has more interest in Lebanon than its leader has its time for the Lebanese leader to put his pygamas on and leave again, lets hope Iran takes him this time.

God Bless Lebanon and the Lebanese people!!! Thank you France and may you get it all the good you are doing for a Country that a few weeks ago the clown Diab belittled your minister all back 7 folds...