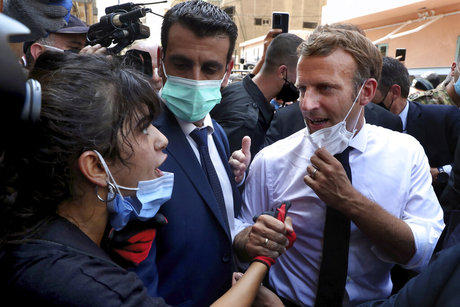 White shirt sleeves rolled up, Emmanuel Macron waded through cheering crowds in the devastated streets of Beirut Thursday where disaster survivors pleaded with him to help get rid of their reviled ruling elite.

Doing what no senior Lebanese leader had done since the deadly explosion at Beirut port two days earlier, the French president allowed himself to be thronged by residents of one of the capital's worst-hit neighborhoods.

Dozens of people chanting "revolution" and pleading with him for help pressed against his phalanx of bodyguards as he walked through the Gemmayzeh area for around 45 minutes.

Long simmering anger against Lebanon's leaders has flared since the blast, which appears to have been caused by negligence and is widely seen as the most tragic manifestation yet of the corruption and incompetence of the ruling class.

Some welcomed Macron like a savior, while only a few heckled him, arguing that his mere presence in Lebanon would only serve to legitimize a political system they want to kick out wholesale.

"Help us, you are our only hope," one well-wisher shouted as Macron stopped to meet residents, while neighbors applauded from flats with broken windows and crumbling balconies.

A woman wearing a face mask and heavy duty gloves cut through the crowd to catch the attention of the French head of state before clenching his hands firmly to make an impassioned plea for help.

Under the nervous gaze of his suited bodyguards, Macron hugged her in a prolonged embrace that triggered wild cheers from the crowd.

Throughout the dramatic walkabout, Macron appeared to savor the moment. His moment.

The scene was reminiscent of Jacques Chirac's legendary 1996 walk through the Old City of Jerusalem, a moment that came to define his style as a president and contributed greatly to his popularity.

"My home in Gemmayzeh has vanished and the first person to pay me a visit is a foreign president," well-known actor Ziad Itani wrote on social media, telling Lebanese leaders: "Shame on you."

"It seems this is more than a visit. What's happening on the streets of Gemmayzeh is historical."

Clamoring around Macron, people chanted slogans made popular during the country's October popular uprising, launching insults at the political leaders he was to meet hours later.

Macron, when pressed by residents -- some bearing the bandaged wounds of the cataclysmic explosion that disfigured their neighborhood -- vowed to be tough and push for reforms.

"I understand your anger. I am not here to endorse ... the regime," Macron assured the crowd. "It is my duty to help you as a people, to bring you medicine and food."

One woman implored Macron to keep French financial assistance out of the reach of Lebanese officials, accused by many Lebanese of rampant graft and greed.

"I guarantee you that this aid will not fall into corrupt hands," Macron said.

He promised to pitch a "new political deal" to the country's leaders, and to press them to deliver sweeping change.

"I am going to talk to them ... I will hold them accountable," Macron said before getting into a black limousine headed for the presidential palace.

In only a few minutes of his apearance he gave people hope even if it is the only thing he can do. I am sure he was stern with Clown and his thieves but our uselss leaders will screw things up again....

Whyaskwhy.....what? are you serious?! clown, strawberry and drab would get their shoes dirty in all that rubble!