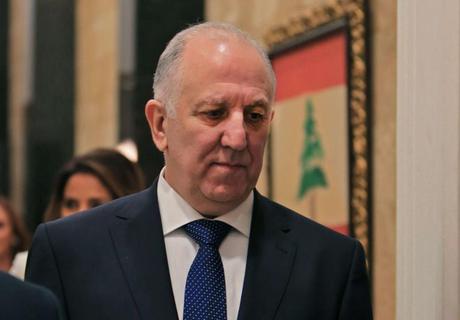 Interior Minister Mohammed Fahmi said on Thursday that he plans to step down from his post if names of those responsible for the mega Beirut port blast were not disclosed at the end of the five-day investigation deadline, al-Joumhouria daily reported.

“I will resign if the investigation committee does not name the culprits responsible for the Beirut blast when the five-day investigation deadline ends,” said Fahmi in remarks to the daily.

The Minister said “maximum punishments must be taken against the perpetrators, or I go home ... there is no compromise on this issue.”

At least 149 people died and more than 5,000 were injured in Tuesday's colossal explosion of a huge pile of ammonium nitrate that had languished for years in a port warehouse in the capital.

Fahmi said 23 individuals have been detained so far for investigation.

Don't threaten, just quit. We want all of you gone!!!

Can this was criminal protege of Aoun the senile just step down? he will make us all happy... he could also take Aoun with him

After Macron's visit, if the government had a tad of pride they would have resigned immediately. He told them that they are incompetent as they have done nothing other than blame and words. Macron was honest and straight. He repeated many times. I cannot change them. You voters, do it.
We love Lebanon. Save it!

Maybe they do have a conscious?

People with a minimum of integrity and honesty would never accept to be part of this regime.
As long as the same warlords name are present in the government or in the opposition corruption and incompetence will remain.

Macron must quit!!! The message of Macron was that support more chaos to Lebanon... Macron is jewish

Shut the hell up tric.portugal. Jewish or not he is doing more for Lebanon than your so called Lebanese be it Christians, Muslims whoever...

look at this terrorist - doesn't care that lebanon just suffered one of the worst accidents in its history.

When exactly was the last time tric.portugal had anything positive to say about anyone, any event or anything at all? I don't remember.

Oh no don't quit!! the Country will become a failed state with out you, it may become like Somalia or Haiti.

This egyptian pos is threatening to run away because the explision happened under his watch, what a coward! Get back to Sisi land you POS.

Quit, Bassil has another one his clowns lined up for the position. This govt is nothing but a cover for Gebran Bassil and Hizb

This guy al he does is issue threats. Threat to quit, thereat to arrest demonstrators, threat to close streets/Shops/restauarnts, etc....

Ebola controls the port! Will one of them be arrested for once in the HISTORY of this country!!!??

Don't let the door hit you on your way out

just quit and consider a career in acting drama movies. The ones truly responsible are your bosses! Don't play games on ur people