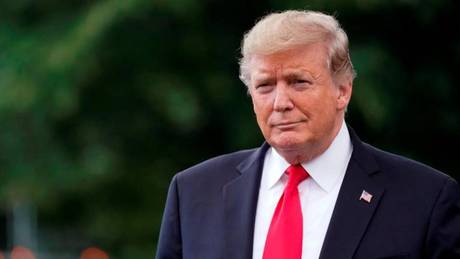 President Donald Trump said Friday that he would take part in an international conference call for donors organizing aid for Lebanon after the giant explosion in Beirut.

Trump, who talked with his Lebanese counterpart as well as the conference's organizer French President Emmanuel Macron, tweeted that "everyone wants to help!"

"We will be having a conference call on Sunday with President Macron, leaders of Lebanon, and leaders from various other parts of the world," he said.

A White House statement later said that Trump had "expressed his deepest condolences to the people of Lebanon" in the phone call with his counterpart Michel Aoun, in which he "vowed to continue United States support in providing critical emergency supplies to meet health and humanitarian needs during this difficult time."

The blast at Beirut's port killed more than 150 and devastated swaths of the city, as rescuers continue to desperately comb the rubble for survivors.

Officials have said a huge shipment of hazardous ammonium nitrate had languished for years in a warehouse at the port and somehow caught fire, leading to Tuesday's earth-shaking blast.

Lebanon's hospitals, already strained by rising coronavirus cases and a severe economic crisis, were heavily damaged by the blast and overwhelmed by casualties.

The World Health Organization has called for $15 million to cover immediate health needs.

The United Nations said up to 100,000 children are among the 300,000 people made homeless, including many who have been separated from their families.

Relief flights from Iran, Saudi Arabia and the United Arab Emirates landed in Lebanon on Friday, following others from France, Kuwait, Qatar and Russia.

Trump said three US planes loaded with supplies were on the way to Lebanon, as were first responders and medical workers.

God bless the People of the USA! The present administration though? Not so much...

@tric, your grey matter is so polarized rendering a one dimensional perspective. At the very least learn to articulate better though dogmatic thinking like yours is no different from that of Hizbullah, Iran, nazism etc.

Dogmatic??? You are a LOT worse. You support the fascists who committed the massacres at Shatila, Basra, Tel Al Zaeter, and karantina.

Now that we know that French President Macron tried to pressure US President Trump not to impose sanctions on Hizballah, we know which side he will be on during the talks.

Hi Phillipo. Hope you're keeping well during the Covid-19 calamity.
Now, I obviously understand where you come from, so I understand why you might think this of Macron. However, the US sanctions are on Lebanon, not just on Hizb, so it's the Lebanese people who are suffering from it most, not Hizb.
Point in case: My father-in-law in France wanted to help out and send a financial transfer to my dad's bank account, now that my dad's come out of retirement to help out as a volunteer at his old hospital (he's a surgeon). The transfer was refused because the familial relation was deemed not close enough to allow for it.

*"Case in point", before the grammar police come for me...

Aoun is truly the Lebanese Trump: Instead of doing everything in his power to aid and comfort the people, he is spewing baseless conspiracy theories so as to shrug off responsibility.

Trico
You make a lot of typing errors let alone that you are not articulate when you write.
Let me guess typing errors come from your fat cholesterol laden fingers on a small phone keyboard and the lack of articulation is due that you did not each college.
Keep in your simple mind that you are in a public forum.

Reach college. You see Trico I check on my stuff after in release it