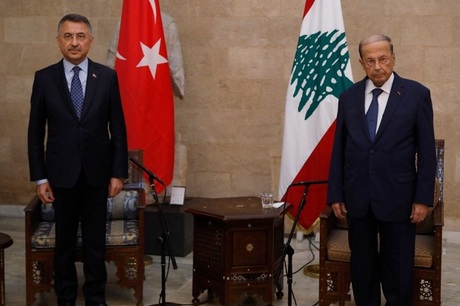 Turkey's Vice President Fuat Oktay says Ankara is ready to help Lebanon rebuild Beirut's port and send ambulance planes to evacuate some of the wounded for treatment in Turkish hospitals.

Oktay spoke on Saturday to reporters after meeting Lebanese President Michel Aoun. He added that a Turkish search team is working at the port that was destroyed in a massive explosion on Tuesday.

Oktay said Turkey has already sent two field hospitals, 400 tons of wheat and food products. He added that his government is ready to use the Turkish port of Mersin to receive products that can be later sent to Lebanon in smaller ships.

A huge blast at Beirut port on Tuesday rocked and devastated major parts of the capital and its surroundings.

The reverberations of the explosion were felt as far away as Cyprus.

At least 154 people were killed and around 5,000 others injured in the tragic incident.

Dudes.. just to be clear.. the turkey is the one on the right of the picture.. standing (barely) in front of the Lebanese flag...

he can barely stand at that! senile fool.

what does Turkey really want from Lebanon? They took over Northern Syria and changed the currency. I think Lebanon needs European help rebuilding not other Arab countries which will play into the Shiite-Sunni struggle for dominance...We are trying to move away from religion and politics and let the Lebanese peoole elect non-politicians not backed by parties. Virgin politicians any day over seasoned corrupt thieves. REVOLUTION ● RESIGNATION ● REFORM

Turkey is bankrupt. Better to focus on North Africa for them as Obama promised them this prey. Luckily it’s being reversed now.