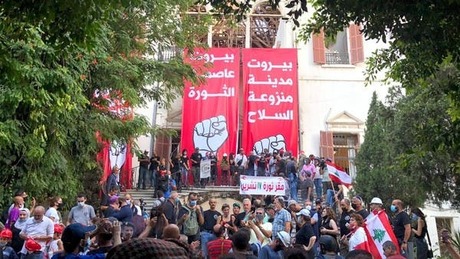 A group of protesters led by retired Lebanese army officers stormed the foreign ministry in Beirut Saturday and declared it the headquarters of the revolution.

The takeover, which was aired live on local TV, happened as most of the security forces' attention was focused on a tense demonstration against the ruling elite a few hundred meters down the road.

"We are taking over the foreign ministry as a seat of the revolution," said Sami Rammah, a retired officer who spoke through a loudspeaker from the ministry building's front steps.

"We call on all the anguished Lebanese people to take to the streets to demand the prosecution of all the corrupt," he said.

An explosion at Beirut port Tuesday that is widely blamed on the incompetence and corruption of the ruling elite killed at least 158 people, wounded 6,000 and made hundreds of thousands homeless.

Rammah, who stressed the protest camp was "not against one specific person but against a system that destroyed the country", urged the international community to boycott the government.

"We call all our Arab allies and other allied nations and the Arab League and the United Nations to consider our revolution as the real representative of the Lebanese people," he said.

His call came amid intense diplomatic activity in solidarity with disaster-struck Lebanon and on the eve of an international donor conference.

Four days since the blast, grief gave way to rage, with a large demonstration Saturday that was reminiscent of the unprecedented nationwide and cross-sectarian protest movement that erupted in October.

Around 200 people occupied the foreign ministry compound, which lies on an upmarket street in central Beirut.

Their entry into the ministry appeared to have been facilitated by the damage the historical building sustained in Tuesday's monster explosion.

Some of the protesters pulled the portrait of President Michel Aoun off the wall and smashed it on the ground, an AFP correspondent there said.

I wonder which embassy is paying for the protest now? Don't stop until you have them all hanging. GOD BLESS LEBANON AND ALL THE LEBANESE!!!

Very Good! Start taking over ALL government buildings and all politician's homes and return it to the Lebanese people. The Army needs to do the right thing and step aside. Who's saying Shia, Shia, Shia???? This is primarily against the Shia corrupt government run by Nasrallah & Iran. This is not about Shia, Drive, Sunni or Christian stupid. This is about the Lebanese People suffering who belong to all religions. This is not religious or political stupid. Its about corruption, poverty and the value of human life stupid. Stupid is a kind word for you...God Forgive Me For Insulting A Stupid Person. Shia, Shia, Shia---really??? Hezbollah is on its way out...go with them stupid!

Our revolution is cutting the head of catholics in the Lebanese political system, and promoted by the Arab Islamic league

Beside barking Shia and co does this lobotomized creature able to bark something else?
Such as Shia, Shib, Shic, Shid,.... up to the letter t

You mean like blowing up a bus full of Palestinians to start a war in 1975? I'm guessing from your cross emblem that you're familiar with that event. That was a pretty constructive way of ending social inequalities, right? I am Christian btw, just an evolved one that won't use violence.