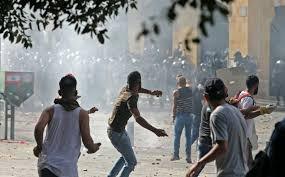 Mock gallows nooses tied to brooms: Lebanese protesters on Saturday clamored for bloody revenge against a leadership they blame for the massive blast that engulfed their capital.

"There is hatred and there is blood between us and our authorities," said Najib Farah, a 35-year-old protester in central Beirut. "The people want revenge."

On a street leading to parliament, young men lobbed stones at security forces who replied with tear gas, a familiar sight in Lebanon since last October.

Thousands of young men and women earlier revived the main camp of a months-long protest movement, some of them carrying portraits of blast victims and a banner bearing the names of the dead.

They pinned the blame for Tuesday's mega-blast at Beirut port on leaders they say deserve nothing less than the fate of the 158 people who died as a result.

"You were corrupt, now you are criminals," read another.

The explosion that disfigured the city and shocked the world is widely perceived as a direct consequence of the incompetence and corruption that have come to define Lebanon's ruling class.

After a morning of funerals, protesters marched through the wreckage caused by the monster explosion that killed over 150 people, wounded 6,000 and left an estimated 300,000 temporarily homeless.

The crowds that converged on Martyrs Square breathed new life into a protest movement that started in October but was snuffed out a few months later by the coronavirus pandemic and a crippling economic crisis.

"There is now an opportunity for real change, it's not like the other demonstrations since October," Farah told AFP.

Demonstrators walked over shards of glass from gutted windows, chanting: "Revenge, revenge, until this regime reaches an end."

Carrying a broom with a noose attached to it, Jad, a 25 year-old advertising professional, complained that the state was nowhere to be seen in the huge and ongoing cleanup effort across the city.

"Everything is trashed, we have had to repair the streets for three days, while there is no government presence at all," he said.

"We are walking on the rubble of our city."

This compounded the boiling anger many ordinary Lebanese have felt towards authorities since the blast.

"We are still under shock, but we know one thing for sure: we are going to wipe the floor with them," he told AFP.

For a Lebanese public already crumbling under financial woes and beset by economic disillusionment, Tuesday's blast was the straw that broke the camel's back.

Lebanon's worse political crisis in decades has plunged nearly half of the country's population into poverty, up from a third before the crisis.

A coronavirus outbreak further shuttered an economy that must now contend with more than $3 billion in damages from the blast.

One protester raised a poster bearing portraits of top politicians and the phrase "Execute them".

Medea Azoury, a 46-year-old demonstrator, said the fault lines have been drawn.

"We can't take it anymore: we're being held hostage, we can't leave the country, we can't withdraw money from the banks, and people are dying of hunger," she said.

On top of all that, "there are now 300,000 people who are homeless and Beirut has been completely destroyed," she added.

"This is the great return of the revolution and it's either them or us."

Punks in plain clothes are firing live ammo at the demonstrators and the cops and Lebanese army soldiers are standing by and looking on.

God be with the revolution.

Macron arrived to Lebanon only to promoted more chaos...Macron wants to destroy the catholics in Lebanon...the Judas of France!!!

Macron arrived to Lebanon only to promoted more chaos...Macron wants to destroy the catholics in Lebanon...the Judas of France!!!

REVOLUTION ● RESIGNATION ● REFORMS
Nothing else needs to be said or done!

Exterminate the thieves. All of them.

Trico. ....roubed Lebanon to the Christians .... I mean to retype your nonsense I had to fight against the autocorrect feature in my device. How do you succeeded to do it?

Ansar you piece of shit at least for me I won’t convert because I don’t believe being a scientist.
Let alone worshipping a a meteorite.
You have to be so weak to seek belief in something and you are more weaker when you have to crawl on your feet smelling carpets to worship a divinity that did not even cure chickenpox while science did

I am so sorry reading most of the comments, I am not a Lebanese.
But it seems to me that to many people still want to vote for their good old Party lines, instead of ending the old system.
Why not try to have new elections based on independent people with no religious or special interest voted in to be your new government.
It seem s to me that you really need secularization. You have to stop mixing religion with politic.
Another way is to get the military on your side, and let them take control (if they are strong enough to do that). Until you can make a new constitution, where you forbid religious partys.
I hope I will be able to one day visit your wonderful country again and enjoy meeting with the rainbow of people a met last time I was there. Go to a restaurant having a nice Lebanese meal with plenty of Lebanes wine, and maybe even sharing a good joint afterwoods with good friends from Beka vally and Beirut. I miss you all...

Many will want to vote for women, with all due respect to testosterone overdosed maniacs, young and old. The "new" ones sound as volatile as the violent ones who started the war in 1975.