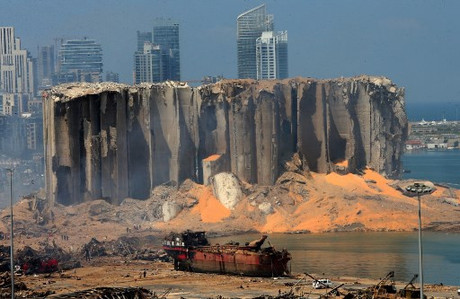 At the end of a five-day government-led investigation deadline in the Beirut port blast, the investigative committee tasked with the probe reportedly submitted its findings to the Secretary General of the Council of Ministers, al-Joumhouria daily reported on Monday.

Authorities will look at the report during a meeting at Baabda Palace, it said.

The report determined the administrative responsibilities for the devastating port bombing starting from the entry of the ship that was carrying ammonium nitrate until the moment it exploded, said the daily.

The provisional death toll from the massive blast stood at 158 Sunday, wounded some 6,000 and left an estimated 300,000 homeless.

God bless hezbollah aka the Lebanese government for conducting the fastest investigation in history and for unveiling the truth.

These corrupt mafia types have the most to lose. How about they roll up their sleeves and get to work? We’re all Lebanese, let’s start with that and stop politicizing with human lives. Posts like this are the problem with the regime.

If those grain silos had not been there to absorb much of the force of the blast, the high-rises in the background might have been badly affected.

No truth will come out of a local inquiry, it's a waste of time. THERE MUST BE A CREDIBLE INDEPENDENT INTERNATIONAL INVESTIGATION, the least thing that the Lebanese patriots deserve !

Too late for an International Independent Investigation. The site has been compromised already... just like after the Hariri Blast... the towel heads cleared and tempered whatever evidence there might have been...

The interesting thing here is that while this investigation is nowhere to be trusted, at least some people will have to be charged. Some people with responsibilities at the port. The question is when they are faced with a possible life-in-jail sentence or even death penalty, will they start to spill the beans about what has been going on at the port over the last decade? So we could look at different scenarios: 1. Secrets about Hezbollah-operations and/or massive corruption will come out 2. The arrested port officials will get very mild sentences, and no secrets are spilled 3. The most dangerous port officials (from Hezbollahs point of view) will die under mysterious circumstances.

or they'll be liquidated

Amazing, forensic analysis of bomb site concluded, reports by chemists and physicists completed, witnesses interviewed including those who have been arrested and have knowledge of the Port activity, explanation why all of the nitrate is stored right next to the dock sea-front, who was in contact with the ammonium nitrate - all by an anonymous Hezbollah committee. Did they take photos of the of the cellar under the warehouse and the secret tunnels as well. Viva Hezbollah. Our thoughts and sympathy to all the real victims of the blast. We in South Africa also know about cover-ups. One day the truth will come out. We wish you real strength and comfort. Viva the people of Lebanon!