Iran: Beirut Bombing Should Not Be Politicized 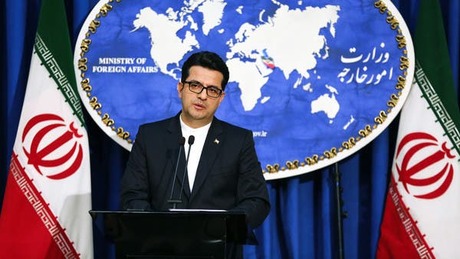 Iran on Monday said the massive explosion in Beirut last week “must not be exploited for political purposes,” adding that the United States “should lift sanctions against Lebanon.”

He added: “If America was honest about its assistance to Lebanon, they should lift the sanctions.”

Such a flagrant hypocrisy. Iran through Hezbollah, has been in control of Lebanese politics ever since they secured the treacherous alliance of the Free Patriotic Movement of Aoun & Bassil, and other allies like those other traitors Sleiman Franjieh, Talal Arslan and other so-called March 8 allied MPs.

stfu iran--you are the root of the problem.

Mind your own business, iranian terrorist.

What a misleading headline. It wasn't a bombing, but an explosion due to years of neglect.

A precondition that a country could be independent from other foreign countries is that its population experience that they are equal, united and feel that they belong to one nation; unfortunately because of the current sectarian system, the population is divided in various religious groups , some are having more privileges than others, subsequently they believe and become conditioned that they are first class citizens. It is obvious that this is absurd and this creates( in the past, in the present and in the future) continuous time bombs in this country.

Mind your own damn business Iran!

I ran just go die already. It's you and your henchman that have brought this country to it's vital collapse.

Go worry about your own population that is over 50% 25 and under and no jobs.

Someone should tell this guy in plain Arabic فاقد الشيء لا يعطيه leave us alone already and go fix your own destruction in your own country. بلغ السيل الزبى

Iran needs to be blown off the face of this planet. they are responsible for the woes in the Middle East