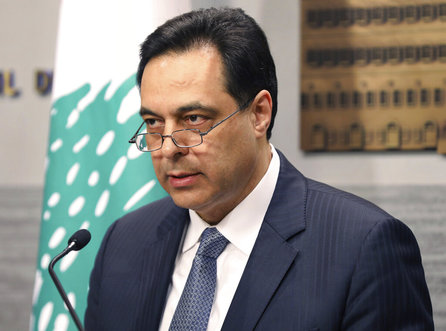 The move risks opening the way to dragged-out negotiations over a new Cabinet amid urgent calls for reform.

“This disaster is the result of chronic corruption,” Diab said in an address to the nation, referring to the port disaster.

“The corruption network is bigger than the state,” the resigned PM added, lamenting that some only care about “populist speeches.”

“Some did not properly interpret the October 17 revolution. That revolution was against them,” Diab went on to say.

He decried that “a (political) class resisted through all dirty means to prevent change,” adding that “they knew that we resembled a threat to them.”

"They should have been ashamed of themselves because their corruption is what has led to this disaster that had been hidden for seven years," he added.

“Today we are heeding people's demand for real change. Today we will take a step back in order to stand with the people,” Diab said.

He added: "I declare today the resignation of this government. May God protect Lebanon," repeating the last phrase three times.

The developments follow a weekend of anti-government protests in the wake of the Aug. 4 explosion in Beirut's port that caused widespread destruction, killed at least 160 people and injured about 6,000 others.

Protests were also underway on Monday during Diab’s speech.

Although Diab's resignation had appeared inevitable after the catastrophe, he seemed unwilling to leave and only two days ago made a televised speech in which he offered to stay on for two months to allow for various factions to agree on a roadmap for reforms and early elections. But the pressure from within his own Cabinet proved to be too much amid the resignation of at least four ministers.

The Lebanese want heads to roll over the port tragedy and are asking how a massive stockpile of volatile ammonium nitrate, a compound used primarily as a fertilizer, was left unsecured at the port for years.

Diab's resignation was met with cars honking in the streets and celebratory fire in the northern city of Tripoli.

tric whatever. is your english translator on strike?
and by the way, you are one neurotic character,,,

You must be a terrorist!

"Celebratory gunfire erupted in Tripoli in the wake of Diab's resignation."
.
Daesh comemoration

Aoun must numinated a Cristhian Cabinet, until the ...

Lebanon must finish the eletoral system of sect´s...must only have one sect!!! the Catholic ...only the cristhians can vote ( after what the evangelicals are donne to the cristhianity in Levant, call them cristhians its a pure aberration !!)

Don't anybody congratulate yourself. They did this on purpose to avoid audits to the Central Bank and commercial banks on who stole all the money.

I have my own suspicions that all the ruling parties (and ex ruling parties) are involved in this bombing to avoid any investigations on all the stolen billions.

Think smart. Don't fall into their traps. Don't blame only one party, this is what they want you to do. They are all guilty with blood on their hands.

What they want is to keep fueling sectarian conflict so that they can stay in power. If educated people who post on this site keep falling into this trap (and post ignorant comments such as the one above) , then don't expect that a miracle will save your country. It will continue to go to hell.

Only an uneducated Shia (basically 95% of them) would say “counvert or diye”. That’s the root of the problem. Berri and Nasralrat always made sure that their base remained uneducated .... that’s why it’s pretty much hopeless. Most educated people belong to other sects because they studied, worked abroad or traveled a lot.

You can’t help people who don’t want to evolve and chant “we’re the sons of Khamaney and we will establish the wilaya”.

S.o.s if you're so smart then you should know that that account is a troll account making a parody of how he sees shia. And what are your statistics? Show me proof that lebanese shia are 95% uneducated while other sects are the educated ones? And what good is that education if all those educated non-shia couldn't stop the country from getting robbed, from getting broke and if it made people vote for the same incompetent politicians for years? If the uneducated managed to take over lebanon then what does that say about the so called superior educated ones?

100% agree. Whatever opinion you have of Diab, the real tragedy is that his parting words are true. The real filth of this country is still very much in power.

as long as the main cancer is not eradicated, more suffering the populace will go thru. and the cancer in question is none other than hizballah.

It seems that the only uneducated ignorant person on this forum is s.o.s.
Your money was robbed by your government, your capital was just blown up, and your country does not have enough flour to feed people for more than 2 weeks, and all you can do is post racist comments? Provoke sectarian tension? Shame on you. You have not learned any lessons from the past ignorant idiot, have you?

In any case, this is your country, and I hope that it collapses some more on your head. You are a helpless moron and you deserve to be a slave to your corrupt criminal leaders, which you will always be.

s.o.s., I have no sympathy for any politicians or religious leaders whatsoever. They are all guilty and criminals, including the criminal aoun & his company.
In any case, this is your country not mine. All I have are very distant memories. So you can do whatever you want. You can continue to burn it down as you wish and fall into the traps that your leaders dig for you. Unfortunately there is no cure for idiocy, and there are too many people like you.

“A people that elect corrupt politicians, imposters, thieves and traitors are not victims... but accomplices”

You have two choices. Either unite the poor people against the filthy criminals that have ruled the country for 40 years, or keep bickering between yourselves and pay the price forever.

You knew you were a cover for the hizbis from the start...if your didn't know that you're an idiot of the highest order, let alone worthy of your professor title.