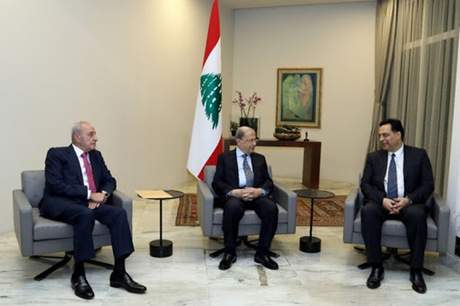 According to “official” documents, Lebanese security officials warned the prime minister and president of Lebanon last month that 2,750 tons of ammonium nitrate stored in a warehouse in Beirut port poses a security risk that could destroy the capital if these materials explode, reports said on Tuesday.

According to a report by the General Directorate of State Security about events leading up to the explosion, it included a reference to a private letter sent to President Michel Aoun and Prime Minister Hassan Diab on July 20.

A senior security official said the letter summarizes the findings of a judicial investigation that began in January concluding that the chemicals must be secured immediately.

The source reportedly told the media of the risks and dangers if these materials were stolen, “they could be used in a terrorist attack,” he was quoted on condition of anonymity.

Referring to the letter sent to the prime minister and president by the State Security, which oversees the port security, the source said: “At the end of investigation, Prosecutor General Ghassan Oweidat prepared a final report which was sent to the authorities.”

He had reportedly warned Lebanese leaders that this "could destroy Beirut if it exploded."

Dear Annahar readers, for much less than that, heads of state & of governments have been arrested, tried and condemned. Aoun & Diab MUST BE HELD ACCOUNTABLE. No one is above the law.

Good Luck getting any justice from the Banana Republic of Lebanon!!!

they all knew about these years ago, this is just a state sponsored coverup to soften the accountability of the president and his banana republic

They knew about it and so did all the previous governments since 2013. They should all hang. Every president, minister and head of minister since 2013.

I have the utmost respect and deepest appreciation for General Aoun who is now President and Shia Imam for being Warned in July about Ammonium Nitrate in Beirut Port and acting on it with high degree of urgency.

So you really thing that the rest of this government and the previous ones did not know about it? They were selling it (or using it) and stealing the money until it all below up. Every minister, and prime minister since 2013 should hang along with the imbecile aoun that calls himself president.

This so called president is a disgrace. The most important question is how will fight Hizbullah and disarm them

Here is the article from Reuter’s:

And Israel is ready to attack: http://m.naharnet.com/stories/en/274101-netanyahu-calls-for-removing-hizbullah-arms-from-inhabited-areas

BEIRUT (Reuters) - Lebanese security officials warned the prime minister and president last month that 2,750 tonnes of ammonium nitrate stored in Beirut’s port posed a security risk and could destroy the capital if it exploded, according to documents seen by Reuters and senior security sources.

The misery in Lebanon affects the middleclass population of all religions, it is time for the population to realise that, I wonder why you keep choosing them? Some time they choose new names but they are all controlled by the same warlords.
I can’t believe that the population is that naive!

yes...was the first time that they send a letter to President and Prime-Minister!!!??? ahhh...it´s a terrorist daesh atack...

The terrorist President daesh Aoun was informed by the General Directorate of State Security, that 2,750 tons of ammonium nitrate stored in a warehouse in Beirut port poses a security risk and that it could destroy the capital if these materials explode, three times. The first time last December and he did nothing. He doesn't even dare facing the people. If he even tried to visit the affected areas of Ashrafieh, Jemmayze and Mar Mkhayel the CHRISTIAN population there, will tear him to pieces like they did to his pictures.

yes...Hariri, Riffi never know about nothing...

Dude.. quit picking on Portugal's village idiot.. can't you see he's in the middle of a fire sale... The amount of posts lately.. using all his aliases.. is like someone getting rid of his stock.. before going out of business... Come one come all.. Two for one.. three for one.. 80% off.. everything must go... I'm gonna miss the guys.. I remember coming over.. and spending hours just browsing... It's relaxing after a long day at work...

“A people that elect corrupt politicians, imposters, thieves and traitors are not victims... but accomplices”

s.o.s, By posting your comments, your are either the biggest supporter of kizb. or you are the biggest idiot on this planet. Unfortunately, there are no known remedies for idiocy.

I really hope that it is the latter, so help you god.

yes, the President!!! everybody know that Israel, Meca and France wants to cut the Head of the Cristhians in lebanese political system...it was a daesh atack to Beirute agaisnt to the cristhians...

Bro, what you smokin'?

I respect s.o.s with a dot after its name for being innovative and forward thinking like a true _mowaten_.

The words Hizballah, Iran, Berri, do not exist in this highly sensitive reuters article. Aoun and Hasan Diab are the scapegoats. They will bring down Aoun, and the kizb will take over.