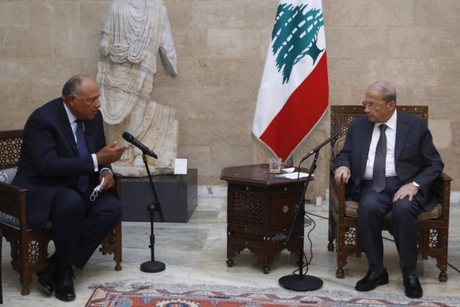 “We are ready to stand by brethren Lebanese people, and we are confident of the Lebanese' ability to overcome this crisis and face the challenges after the Beirut port explosion.”

“A lot of accumulations have caused a lot of suffering. It is necessary to work on the special priorities of the Lebanese people and on reconstruction,” he added.

Shoukri noted that efforts have been intensified at various levels to provide aid to the Lebanese.

“An air bridge for Lebanon relief and humanitarian aid, as well as a sea bridge for reconstruction has been set up. Egypt stands by the Lebanese people,” he concluded.

I believe Lebanon will be better off when the constitution will change, and equal (all inclusive,also political) rights in government positions will be implemented for all Lebanese ,meaning religious leaders have nothing to do with politics .Government positions should not be allocated based on religious background.The constitution creates political groups with direct link to their religion and this makes it difficult that Lebanese feel and behave as one population belonging to one nation. If the constitution will change militia leaders and warlords will become obsolete, and Lebanese population could be united . Lebanon of today is stil a product of the Ottoman feudal era, based on divide and rule approach, feudal systems ensures that the population is dependent of certain families and the latter are controlled by foreign powers. Since the independence of Lebanon all attempts to govern and manage were window dressing.

Unfortunately I can't forsee any of the present day cliques willingly agreeing to give up their death-hold on the economy of the country. Therefore there will be no changes in the voting system or the distribution of ministries, the Presidency, the Speaker of Parliament or the Head of the Army. Hizballah will continue to control them all.

The only way out of the situation:
1. Disarm Hizbullah
2. Make peace with Israel
3. Change the constitution

and integrated the two million of meca refugies with right to vote...recognize Jerusalem the Catipal of the Torah State...