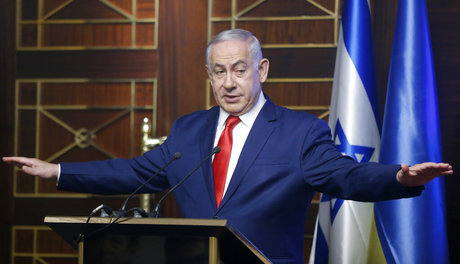 “I held phone talks with French President Emmanuel Macron and congratulated him on his leading role in the Lebanese arena,” Netanyahu tweeted on his Arabic-language account.

“I expressed Israel’s readiness to offer Lebanon humanitarian assistance and stressed that they must be all sent directly to Lebanese citizens,” he added.

“I said that in order to avoid tragedies similar to the Beirut port blast, explosives and missiles stored by Hizbullah must be removed from all inhabited areas in Lebanon,” Israel’s PM went on to say.

He added: “I clarified that should Hizbullah think that it can resolve the Lebanese crisis through creating a crisis with Israel, that will be a big mistake.”

Nassrallah the iranian terrorist stated on countless occasions he has over 200,000 rockets ready to destroy the state of Israel. Can he tell us where these weapons are stored? Are they anywhere but inside homes, civilian areas, the port and airport?

Only Israel has the power to destroy Hizbis - unfortunately that's also right. Mr Trump and Netanyahu may well have good reason to strike soon before US elections.

Netanyahu is right and you have to be blind to see it. Hizballah must be disarmed or at least move their weapons from the houses of these poor/stupid people.

Who cares what Natanyahu has to say, it appears his political career is about to end by January... he’s going to follow the path of our crooked politicians. Ya3ne barra!

Lebanon can remove some refugies for israel too !!???...

was Israel atack !!!??? probably yes...they want to extreminated the cristhians in Lebanon...they refuse to consider Jerusalem the Capital of the Torah State...

the next priority of Lebanon is the return of the 2 million meca refugies...another bomb ready to explode in Lebanon !!...Tripolly prepares the ignition with the help of the Daesh Macron !!

Where does he think he is flying to

must be a Catholiq the next head of the Cabinet of Emergency !!! must be the response against the Daesh ataques to Beirute...

The words Hizballah, Iran, Berri, are not mentioned in this Reuters article. Aoun and Hasan Diab are the scapegoats. They will bring down Aoun, and the hizb will take over

Do you ever think hizbola and Israel are working together? From what I can see hizbo are smashing the Syrians, Iraqis, Yemenis and now the lebanese.. they smash everyone but the Israelis.

opinion101 Israel doesn't want Hezbollah to smash anyone – especially not the Lebanese. Israel would far rather just make a peace deal with Lebanon. Everybody knows that only Iran, Syria and Hezbollah that stopped Lebanon and Israel from signing a separate and final peace treaty. The UN has already defined the border between Israel and Lebanon. There is nothing real left to fight over. If Hezbollah did not force Lebanon to act as Iran's missile base on the Mediterranean, there would be no reason at all for Israel and Lebanon to fight.

Mr Netanyahu leave a good legacy and help get rid of hizbi cancer not just affecting Lebanon but ALL the Middle East. Their project is criminal and comes at the cost of all stakeholders in the region. All for an outdated ancient ideology called wilayat al fakih. Send them back to iran where they can have as much fakih as they want.