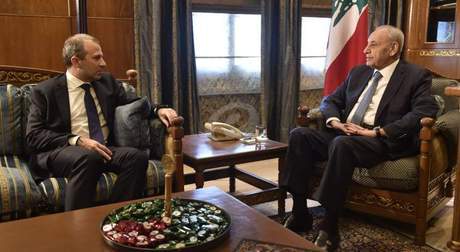 The massive Beirut explosion revived a US legislation bill aimed to impose sanctions on Lebanese officials on charges of “corruption, ties to Hizbullah and violations of human rights,” the Saudi Asharq al-Awsat reported on Wednesday.

For months, US lawmakers and officials have been preparing draft laws and proposals to impose sanctions on Lebanese officials and political bodies because of their direct links with Hizbulah, classified as a terrorist organization in the United States, said the daily.

It added that sanctions will also be imposed on Lebanese officials involved in corruption and in extensive violations of human rights.

The daily added that “13 Republican members of Congress have recently submitted a 111-page bill proposal to impose the largest sanctions yet on Iran, including designating the Houthis in Yemen as a terrorist group, stopping aid to Lebanon, and punishing former Lebanese Foreign Minister Jebran Bassil and Speaker Nabih Berri.”

The Republican Study Committee in the US House of Representatives prepared a paper recommending punishment of the Iranian regime and its Lebanese "agents" or Lebanese leaders allied with Hizbulah, in addition to stopping the aid allocated to the Lebanese army, according to the newspaper.

Subsequently, Republican Senator Ted Cruz and Republican Representative Lee Zeldin submitted a bill to combat Hizbullah and withhold 20 percent of US military aid to the Lebanese army “unless President Michel Aoun can prove that he is taking the necessary steps to end the influence of Hizbullah and Iran,” reported the daily.

Best news of the day.

I dont think there are enough legislators in the US to come up with that list ! let alone write it.

The USA administration want´s to cut the head of Cristhians in Lebanon if they not submit to they demnads...convert or die...it was not a accidental explosion it was a daesh atack...and the message is clear...Convert or Die...

Please, Naharnet, do something about it .

It is interesting that Najm (before she resigned), Aoun and Berri promoted and appointed Fadi Akiki, Berri's nephews-in-law to oversee the port explosion cover up, I mean the "investigation". The investigation will be surely be independent and as transparent a thick piece of mahogany.

Nab Berri should go. I have said so many times nothing ever happens in Lebanon without passing through his desk. I am not making this up. It was the mukhtar of my my town back in 2010, when we are at a gathering and they chit chatting and he said so. Mind you my town is loaded with Amal and Hizbos supporters. Used to be 100% Amal till the Hizbos arrived on the scene and now it's more like 70/30 in Hizbos favor.