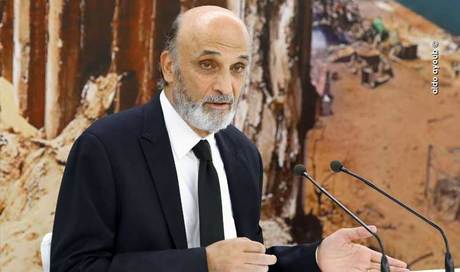 Lebanese Forces leader Samir Geagea on Wednesday announced that the LF’s 15 lawmakers will not resign from parliament without their allies in al-Mustaqbal Movement and the Progressive Socialist Party.

“Any resignations that would not lead to toppling the current legislature would be a lost effort. If we do such a move, we would be strengthening the current ruling authority instead of weakening it,” Geagea said at a press conference.

“If their majority rises to 95 seats, they would have the ability to modify the electoral law, amend the constitution the way they want and elect a president from the first round,” the LF leader explained.

He revealed that, on Monday, the LF was about to reach an agreement on the resignations with Mustaqbal and the PSP.

“We even discussed the details of the resignation announcement, but, unfortunately, it turned out that the government was prepared to resign, and Mustaqbal and the PSP preferred to wait instead of resigning,” Geagea said.

He however added that the LF will keep pushing for ousting parliament and organizing early elections, calling on Mustaqbal and the PSP to endorse his call for resigning.

“If they don’t want to resign by tomorrow, I will urge the resigned MPs to withdraw their resignations prior to tomorrow’s session, or else they would enter into effect. I especially urge the Kataeb Party, and I have communicated with its leader MP Sami Gemayel about that… because we can make an impact inside parliament during this stage,” Geagea went on to say.

And noting that the LF will not take part in Thursday’s parliamentary session, the LF chief said: “We demand an international panel of inquiry, and if this demand is not achieved, we will submit a petition demanding an international probe and the shortening of parliament’s term.”

Geagea also said that “shortening parliament’s term, reconstructing areas affected by the blast, the issue of neutrality proposed by Maronite Patriarch Beshara al-Rahi and reforms, reforms, reforms should top the agenda of the new government.”

As for the possibility of nominating ex-PM Saad Hariri to lead the new government, the LF leader said: “We’re with a totally new, totally independent and totally neutral government.”

bla bla bla...what is a independent governement in Lebanon!!?? is a governement that delay and delay the return of the meca refugies in Lebanon like they donne with the Amonniun...the first reform, the mother of all reforms is the return of the refugies, without that reform, it´s impossible the reform of eletoral system without the Cristhians losing powers in the only Cristhian Nation in all Arab World...the Daesh atack to the Cristhians in Beirute send a clear message to Lebanon...convert or die...Geagea is not Cristhian is a Evangelical!! Geagea defend that the USA evangelicals persecuted the Catholics Institutions in Brasil in name of Torah...

It is very naive or childish to not mention stupid to believe that neutrality can be achieved with the current constitution of Lebanon. In order to reach genuine neutrality, the population must experience first equality; and this is not the case in Lebanon, government positions are allocated based on religion and clans deals. Therefore it is very naive to believe that neutrality can be achieved.

It is naive to believe that democracy or neutrality can be achieved without disarming Hizb and bringing its leaders to justice as well as all corrupt politicians. Gebran Sons wrote for years Aoun is a curce to Christians and Christians position in Lebanon and Arab World; and Hizbollah is a curse to Shiites and Shiites position in Leb the Arab World. Both have successfully destroyed Lebanon and brought it to the abyss. They also destroyed its educational institutions, banking system, medical primacy and entrepreneurial spirit; instead of Lebanon with all its potential becoming the Silicon Valley of the region and regional headquarter for all major western firms as we once were. Electricity subsidy and high-interest rate on debt due to Hizb-caused instability alone add up to over $100 billions. Disarm Hizb and put its leader in prison and Lebanon will certainly regain its glory days.

Good point! How do you plan to disarm hizbulla? Hasn't this been a hot topic constantly brought up by the LF party for more than 10 years?

Totally agree with this sentiment and would trust it is possible. However it seems the Lebanese Judicial system will not act in the capacity that it should. What is it going to take to bring the rule of law into play so that leaders who bring their country down in terms of economic failure and use illicit power while ignoring the suffering of their people; are brought to justice? Glory days require a peaceful resolution and a capitulation by these intransigent bullies.

Disarming Hizbollah will be much easier than expelling the Syrian occupation force after Hariri assassination by Assad/Iran/Hizb agents. First, Thawra has to be reborn with clear objectives based on the correlation between Hizb arms and Lebanon misery, economic bankruptcy, lack of democracy and eroded sovereignty. Hizbollah and Natanyahu are two sides of the same coin depending on each other for survival. Without Hizb arms, Natanyahu would have lost election long time ago and Palestinians would have been represented in Israeli government. Keep in mind most pro-Palestinian US candidate was Berny Sander. Beri is the biggest imposter having nothing of the up building qualities of Mousa Sadr. Next election is properly managed will change everything as in 2005 but never with current politicians

"I especially urge the Kataeb Party, and I have communicated with its leader MP Sami Gemayel about that… because we can make an impact inside parliament during this stage" ...

Are we really human? Or is this just a glitch in the system? Shame on our news outlets for still providing coverage to these aliens.

So long you have someone pointing the gun to your head, no reform and no prosperity will ever happen. Hizbullah will have to give up their weapons (even if it is by force) or don't even waste your time... I am shocked that people and some politicians still think that they have a chance to win anything in the parliament with the current situation, which is the illegal arms of Hizbullah.

Samir Geagea is a man that does not break, give up or surrender. Everything mentioned by him over the press conference today was the hard truth and the right way to go about the current situation. Take advantage of foreign intervention to kick Hizb out of Government control and let us go for an early election for the people to freely vote.

He is unfortunately right.

Having a sect handling firearms other than the army has to be disbanded...I believe this is the first and utmost step before considering the next proposition.
God help Lebanon

Guys ... resigning is a mistake. It will be the handing over of all levers of power to the Hezb and the FPM. They will be able to change even the constitution. Politics is about cold blooded calculations and not about emotions. Look how fast they met to accept the resignations. Have you seen them do anything as fast? The other side understands power and how to wield it.