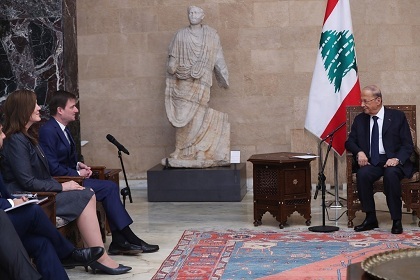 U.S. Under Secretary of State for Political Affairs David Hale met with senior Lebanese officials on Friday, one day after arriving into Lebanon and bypassing politicians to head straight to a hard-hit neighbourhood where young volunteers are helping people after the colossal Beirut blast

Accompanied by US Ambassador to Lebanon Dorothy Shea and a delegation of US diplomats, Hale first met with President Michel Aoun, Speaker Nabih Berri, caretaker PM Hassan Diab and ex-PM Saad Hariri who invited him to lunch at the Center House.

Hale conveyed condolences to President Aoun from US President Donald Trump, and Secretary of State Mike Pompeo, for the victims of the Beirut Port explosion, stressing that the US stands by Lebanon and the Lebanese in the current ordeal, the National News Agency reported.

Hale pointed out the US President’s directives that the United States be present and ready for help, thanking President Aoun for Lebanon’s agreement to receive a team from the Federal Bureau of investigation (FBI) to participate in the investigations being conducted by the Lebanese judiciary.

Hale asserted that the US will not interfere in the internal Lebanese affairs, but will cooperate with its authorities, friends and allies in the region to offer the help needed.

Stressing the need to enforce reforms in Lebanon, Hale said it “opens the door to releasing the CEDRE funds and cooperating with the IMF, because this is what Lebanon needs now.”

Arriving in Lebanon after last week's deadly Beirut blast, Hale bypassed politicians on Thursday to head straight to a hard-hit neighbourhood where young volunteers are helping people abandoned by their state.

At the volunteer hub dubbed the "Base Camp", there is a "focus on getting things done," Hale told a press conference after his tour.

He contrasted the hive of activity to the "dysfunctional governance and empty promises" of Lebanon's political leaders, who face public outrage over the explosion of a vast stock of ammonium nitrate stored for years at Beirut's port.

In the wake of the August 4 explosion of a huge chemical store that laid waste to whole Beirut neighbourhoods, students and young professionals have ditched classes and day jobs to save lives, provide emergency support and start to rebuild.

Hale's visit to the volunteer hub in the blast-hit Gemmayzeh district came days after French President Emmanuel Macron took a tour of the same street last Thursday, as well as meeting Lebanese leaders.

Hale and the American government are still giving credit and communicating with these corrupt mofos. This is in contradiction to their previous stance. People have to wake up, noone is on your side. You have to bare the responsibility and take this into your own hands. This is a war on the people. WAKE UP GOD DAMN IT!!

Whether America or Iran or Saudi, these people have no God. They do not care about you or anyone. Their god is money and power. WAKE THE F UP PEOPLE! STOP TRYING TO THROW THE BLAME ON OTHERS! YOU ARE RESPONSIBLE!

Next elections drop the brainwashed sheep mentality and vote for your children, if not yourselves.

Missed opportunity, meet the ordinary people instead of the officials

Not at all LongLiveLebanon. Biden is very close to Israel.

Biden is pro-Iran .... Trump is pro-Arabs