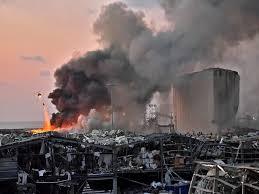 The group also called for a relatively-rare special debate at the United Nations Human Rights Council this September.

U.N. experts do not speak for the United Nations but report their findings to it.

Lebanon's president has rejected any international probe into the Beirut port blast, as demanded by protesters.

"We support calls for a prompt, impartial, credible and independent investigation based on human rights principles, to examine all claims, concerns and needs in relation to the explosion as well as the underlying human rights failures," some 38 UN experts said in a joint statement.

The investigation should have a broad mandate to probe "any systemic failures of the Lebanese authorities and institutions to protect human rights".

"We are deeply concerned about the level of irresponsibility and impunity surrounding human and environmental devastation on this scale," they said.

The investigation should protect the confidentiality of victims and witnesses, and its findings should be made public, the experts said.

"U.N. human rights experts have demanded a swift, independent investigation into the catastrophic Beirut explosion, citing deep concern about irresponsibility and impunity in Lebanon."
.
yes...and must started with the navy militar sheaps that have the obrigation to defend the lebanese waters...started investigate the brasileian evangelical navy...there are zunzun´s that navy of brasil authorizated clandetinement to enter in libanese waters...

tric.portugal, did zarif bring you your July salary with him?