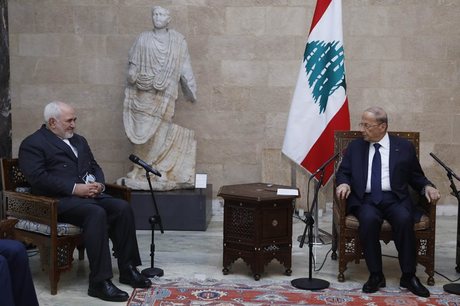 Iranian Foreign Minister Mohammad Javad Zarif on Friday called for the formation in Lebanon of “a strong new government that enjoys the support of all Lebanese parties.”

Zarif voiced his remarks during talks in Baabda with President Michel Aoun.

He said such a government would be able to “perform its missions amid these circumstances.”

Zarif also said Tehran is ready to help Lebanon “in all available fields, especially after the massive damages that the capital Beirut sustained due to this explosion.”

The top Iranian diplomat said there is cooperation possibilities in the fields of health, energy, electricity, fuel and “everything that Lebanon might request to alleviate the pain of the Lebanese.”

“Iran is ready to provide Lebanon with glass and the requirements for reconstructing damaged homes and properties, Zarif added.

The president also underscored “the Lebanese people’s determination to move forward in the face of all types of difficulties.”

The August 4 explosion at Beirut’s port sent a shockwave that killed at least 178 people, wounded nearly 6,500 and defaced the coastline of Beirut -- destroying hundreds of buildings.

Mind your own business zarif

oh aoun you failed senile fool. history will be your judge...hot air of the highest order and treason par excellence.

I agree with Zarif. Strong Islamic republic of lebanon with a cretin president like now.