U.N. Tries to Sort Out Hazardous Waste in Beirut Blast 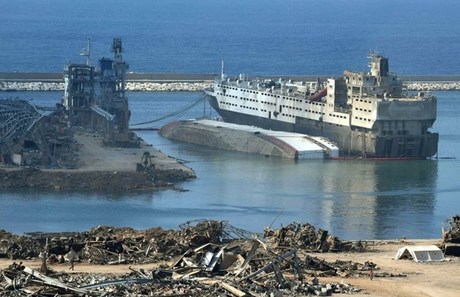 A U.N. agency said Friday it is trying to determine what kind of hazardous debris landed across Beirut after the catastrophic port explosion and how to clean it up safely.

The United Nations Development Program said it also wanted to find out how much the August 4 blast in the Lebanese capital may have polluted the Mediterranean Sea.

"Within seconds, Beirut was covered in layers and layers of debris," Rekha Das, the UNDP's crisis advisor in Lebanon, told reporters at the U.N. in Geneva via video-link.

"We are assessing the types of debris: the bricks, the steel, the glass, hazardous waste, medical waste, and electronic waste also needs to be dealt with.

"We have to find out what is dangerous and what is not. What can be recycled and what cannot.

"And if it cannot be recycled, where can it be safely disposed? Lebanon already had a huge solid waste crisis before the blast."

Das said that besides the visible waste and contamination on the land, "the pollution and the environmental impact that the blast has had on the Mediterranean Sea is unknown."

Das said the scale of the operation meant that the work had hardly begun and the zones damaged by the blast were difficult and dangerous to access because debris was still falling from buildings.

"We know that there is toxic waste... out there, and a lot of plastic," she said.

Das said preliminary results from their first assessments should arrive within a week or so but for the moment, the UNDP was seeking $3 million from donors immediately.

"We're looking at this in phases, so as we uncover the first bit, and we find out how complex the next bit will be, we will ask for more," she said.

The explosion killed more than 170 people and wounded another 6,500.

It happened when a huge stock of hazardous materials stored for years in a warehouse in the heart of the capital exploded, despite repeated warnings of the risk it posed.