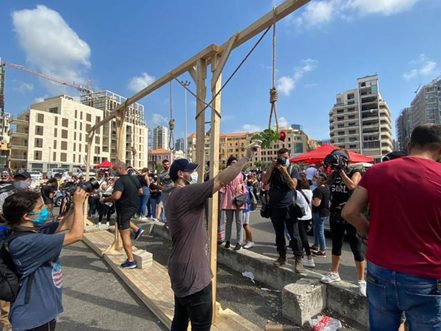 Hizbullah's emphatic defence of the political status quo in Lebanon has exposed it since the deadly Beirut blast to levels of public contempt and anger it was once shielded from.

The powerful Shiite movement remains the dominant player in Lebanon, but the special status it enjoyed and the fear it instilled were torn down by the explosion.

In a scene that was almost unthinkable only a few months ago, an image of Hizbullah leader Hassan Nasrallah was among the cardboard cutouts protesters hanged from their mock gallows this month.

"In the hours that followed the explosion, many blamed Hizbullah," said Fares al-Halabi, who has been active since an unprecedented anti-government protest movement that erupted in October 2019.

Last year, he said, "there had been a tacit agreement among the revolutionary camp not to raise the issue of Hizbullah and of its weapons."

The group is the only faction to have kept its weapons long after the 1975 to 1990 civil war. Its military might rivals the state's and is seen by many as one of the main obstacles to democratic reform.

The verdict of a special court based in The Netherlands on Tuesday found a Hizbullah member, Salim Ayyash, guilty in absentia of murder over the 2005 assassination of former prime minister Rafic Hariri, a Sunni.

The investigation did not establish a direct link with Hizbullah's leadership but it stressed the evidently political nature of the crime.

"Hizbullah operatives do not freelance," was how US Secretary of State Mike Pompeo put it.

By jumping into the mainstream political swamp, the group has exposed itself to being held responsible, if not accountable, for the shortcomings of the state.

Whatever investigations come to reveal of what triggered the August 4 port blast that killed more than 180 people, many Lebanese already agree one thing: that their entire corrupt ruling elite is the real culprit.

Whoever may have owned the stock of ammonium nitrate that blew up and devastated swathes of Beirut, the main powerbrokers of a system that Hizbullah dominates and protects all knew about it.

When protesters, in a rare show of non-sectarian unity, last year sought to bring down the system, it was Hizbullah that came to the rescue of Lebanon's reviled class of hereditary political barons.

"To me that was a significant move. Hizbullah could have shielded itself from this role but chose to protect this house that's collapsing," said Sami Atallah, who heads the Lebanese Centre for Policy Studies.

Hizbullah has long enjoyed some level of popular legitimacy over its history of resistance against Israel, which has spared it some of the spite directed at other parties.

The fervour surrounding Nasrallah as a religious leader also created a lese-majeste rule that made his fiercest opponents think twice about voicing their opinions with the same bravado they would use against other politicians.

That restraint was laid to rest after the August 4 deadly blast as an angry public let rip at their political leadership, Nasrallah included, in ways not seen before.

Many Lebanese saw the explosion as the starkest evidence yet that corruption kills. Tongues have loosened now and ridiculing Hizbullah is no longer sacrilege.

A widely shared meme had a screen grab of Nasrallah choking back tears over the killing of Iranian spymaster Qasem Soleimani in a US drone strike in Iraq earlier this year, contrasting with another of him looking composed and smiling after the Beirut blast.

Lebanon's worst peacetime disaster left more than 6,000 people wounded and maimed, 70,000 jobless, and hundreds of thousands without a home.

Activist Naji Abou Khalil said that before the explosion "Hizbullah had managed to cast itself as an anti-establishment party".

"Now Hizbullah's image as a governing party like any other dominates that of the resistance party," said Abou Khalil, also an executive committee member of the reformist and secular National Bloc party.

Hizbullah long had the best of both worlds, wielding considerable behind-the-scenes power without having to answer publicly for its decisions.

Now it is finding that being the boss comes with drawbacks, Halabi said of the movement which dominates parliament and government with its allies.

"Hizbullah is the de-facto ruler and everything that happens falls under its authority, and the... ruler is always the one who bears responsibility for any negative consequences that occur," he said.

The first step is you round up all of the past and current leaders and put them on trail by the ICC. If that doesn't occur, the revolution is a failure and the people died for nothing...

We can never generalize, that's why I don't say everyone in Lebanon, but a significant part of the population is conditioned to be dependent, first of their own parents and later of the "Zaim" of their clan, I call that slave mentality . In the civilized world, parents teach their children at a young age to be independent, that's what I call freedom. However slave for a good master might have some advantages and freeedom in the desert might have little perspective.

The explosive trail leads to Hezbollah

And you and your Zionists are Angeles RIGHT? Who attacked south Lebanon? Who are KILLING palastinian children and women in PALASTINE? Die in your rage and poison crimminals

Nasrallah is the dictator and he has the military might to stay in power. Lebanon missed the chance to not allow militias while Hezbollah's military was weaker. Hezbollah is not removeable at this point without many innocents being killed.

STrange all attack the HIZB and he is the ONLY one clean and Honest , I guess who ever fight the Zionist create enemies , what about the GAAGAG crimes in the civil war, the Katiab , the MIqati theft in the billions? Jumbo att , sanitary the spy for the Zionists the traitor Harari the agent for AL SAUD
All this Mafia clans who really ruined Lebanon is NO EVIL , you must be a Zionist commenting here go to your CRIMMINAL GOVERMENT which soon will not exist Allah willing

"The powerful Shiite movement remains the dominant player in Lebanon, but the special status it enjoyed and the fear it instilled were torn down by the explosion."

Annahar what fear? Lots of propaganda coming out of you liberals at the moment.

Hariri was the prime minister at the time of the dumping of those explosive chemicals.

That's right the prime minister at the time of the dumping of those explosive chemicals was Tammam Saeb Hariri. Shouldn't you be invading Jdeideh with the Shia settlers?

You are absolutely right, but since HA controls the port, was he able to do anything? NO... With all the respect, everyone knows HA controls Sea Port and Airport, no need to deny or even discuss this part.

Hizbulla controls the port, the airport and the borders, your fearless leader stated he doesn't know what's at the port of Lebanon but knows what is at the port of Hifa. Who are you kidding. The bottom line is Hizbullah controlled the government, Aoun is your puppet and he knew about the chemicals. So don't deflect, Hizbullah did to Beirut what the enemy Israel couldn't do. So go and liberate Palestine and STFU.

Go do some research before spreading poison

You controlled the port You Mystic Prick ... I know! we all know! the money we had to pay to the Shia people at the port to get our stuff through... happens on a daily bases...

Ask yourself this you Mystic Prick ... why is it that your Sect was the only one exempt from Duty... YA!!! I mean I want the Cheapest Car or Car part Guess where us Lebanese had to go to get them? Yup to Iran Shia... WTF!!!!

WE ALL KNEW who was running the PORT(s)

The French government apparently shares the view of Noam Chomsky that Hezbullah's power rests on its representation of a majority of the Lebanese population, Shia Muslims, who are excluded by Constitutional Article 24 from power, since that article reserves half of the seats in the national legislature, the Chamber of Deputies, to Christians. The French government pays one third of the cost of Agence France Presse, according to its website.

Noam was stoned on the best Zouaiter brand Hashish when made the claim.

Hizbo seen to be causing strife in the region on behalf of their master Iran. Do these guys even consider themselves lebanese? They are considered a teriost group to the outside world. Shame on them for the disgrace and image they have brought onto the country.

S.O.S I am sorry to inform you, that you got rid of nobody Hariri is back in the running. Getting rid of the politicians accomplishes nothing, what you need to do is tell your Mufti that Seniora is not a red line and he and all of the Sunni leaders that looted Lebanon need to be held accountable. The same goes for any other sect.

An important prerequisite and indispensable foundation of a sovereign and democratic nation is to ensure that all its citizens have equal rights and equal opportunities, and not religion driven. WITHOUT EQUALITY YOU CAN'T ACHIEVE SOVEREIGNTY. Since the independence, Lebanese were and are not equal. Up till now all attempts for constructive change failed, because an important group in the population are not willing to accept equal opportunity to all citizens.

Needless to say the inequality created the warlords and not the other way round.

Someone needs to destroy Iran- that should solve everything.

how about we destroy ksa and iran and israel and bashar all at once?

You did what? Where is your mistakable Mafia ? Saniora a robed , MIqati robed ,saad Harriss is Saudi agent,, el machnoq , and much more , did you jailed all of them ? When? And how much of the POEPLE millions you got back

Iran till this Day has NOT attacked any country as the USA did , or ZIonists state , NO ONE HERE HAS EVEN MENTIONED ALL THE EVIL THEY DID? WHY ! USA destroyed IRAk, SIRIA, YEMEN LIBIA EYGPT NOW LEBANON and the BLINDS point to the wrong one. The zionists attack palastinian every day kill children, women in their OWN LAND , Gaza has been sieved for more than 30 years? Where are you the brave to defend the oppressed and weak from the monsters crimminals ZIonists ?

We all know what needs to be done. Remove the pesky leaches on the government. That cousin we all have that is used to a certain amount of money because of the way the government works needs to be removed. And someone with dignity and self respect should fill in the position. And thats if there is actually any positive use for that position at all! Its a way of living, and this way of living turns our country into somalia. Change the system. Remove the blood suckers. And for gods sake start fighting back for your right to be represented in govt not ruled and robbed.