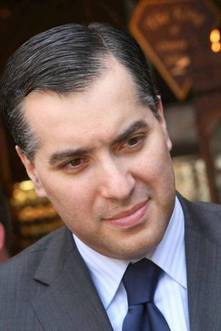 Lebanon's former ambassador to Germany Mustafa Adib was on Sunday tipped to become the country's new premier after his nomination was endorsed by ex-PMs Saad Hariri, Fouad Saniora, Najib Miqati and Tammam Salam.

The major blocs had said they would endorse the candidate chosen by Hariri and the ex-PMs.

The binding parliamentary consultations are scheduled for Monday and Adib is expected to be formally nominated to lead the new government.

Al-Jadeed had earlier reported that in their phone talks on Sunday, French President Emmanuel Macron proposed to Aoun “three candidates chosen by the ex-PMs” and that the Lebanese president “chose one of them.”

“Hizbullah and AMAL have not objected against any of the candidates proposed by Hariri,” the TV network added.

Adib, who hails from Tripoli, had served as the director of Miqati’s office during the latter’s term as premier. He also served as his personal adviser.

The father of five is married to a French woman, according to media reports.

Other reports said that he enjoys the support of several Western capitals.

Who the f he thinks he is to oppose a candidate? The whole nation opposes his existence!

Words of wisdom Justice. Thanks for being our voice.

Aoun opposes Ghassan Oueidat because it Oueidat waswho ordered the arrest of Badri Daher among others before the port investigation was passed on to Judge Fadi Sawan. The FPM are in hysterical full cover-up mode defending the detention of Bassil's own Daher.

Adib means civilised? he is very decent person for a Lebanese politician, poor guy, you're the next victim

Nominated by the Ex-PMs and approved by Aoun and the shia duo! Definitely an independent technocrat:)!

Whoever the prime minster be, if there’s not an agreement to at least effectively neutralize Hizbullah’s weapons, there can be no resurrection for our Lebanon.

What we are seeing is a result of a lack of bonfide opposition leadership. Clown, kizb and other failed partys of yesteryear continue to dictate who should rule and steer lebanon forward unabated. There are no opposition leaders who can make demands and therefore the system will continue to fail. Status quo bring on the next act of the same play....

The truth is that, who ever the prime minister may be, if the duo of hizbollah and Amal is not disarm there will be no resurrection of Lebanon.

Who the hell does Aoun think he is try oppose a candidate, he knows that the whole country oppose his existence as a lebanese civilian