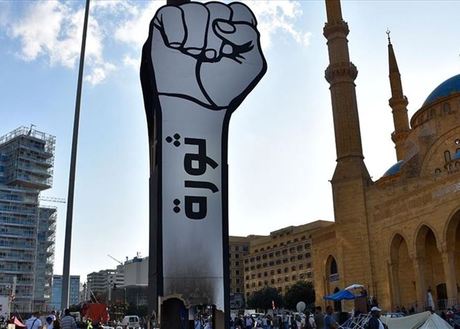 The group said it will join efforts with several protest groups that emerged after the October 17 anti-government protests against the ruling elite and corruption.

Red Line, one of the popular movement groups said in a statement that it “will stop participating or calling for any popular movement in Martyr’s Square,” taking into consideration the “exhausted, wounded and hungry people” of Lebanon getting down in the street without a specific goal.

It said “any future meaningful move is going to be distanced from Marty’s Square,” pointing to the fierce protests erupting on Centennial Day (on Tuesday) “marginalizing the purpose of our moves.”

“The central demonstration organized by the revolution groups on the occasion of the centenary of Greater Lebanon and the acts of violence marginalized the main message behind the movement,” said the statement.

Protests in Marty’s Square “are turning into an aimless apocalyptic violence with an assault on private and public property.”

The group said it will join efforts with several activist groups of the October 17 uprising to form a “political opposition front against the corrupt ruling authorities to change Lebanon through the parliamentary elections.”

A Mount Everest climb! But Hey! Yes we can!!!

Wright move, but peaceful protests need to remain as the pressure from both fronts should achieve quicker goals. The main message should be to hold past Governments accountable for the looting and the implementation of an open procurement process that will hold everybody accountable, be it the Minister issuing the contract and the winner of the contract for not meeting the contract or for cheap work...

Exactly! But we should hold off that and wait till a strong system emerges... then! We will take accounts!
Because the present system protects them.

Whoever they are besides the red line, it sounds like they have been promised a govt position so they abandoned the just cause

It comes a day after David Shenker met with them, these self proclaimed “decision makers” are decrebilizing the street protests . The 17 October cannot be hijacked , the demands were very clear, the end of the current system, accountability for thieves and murderers, the disarmament of Hizbala, the recovery of the looted funds. It was never about an opposition, revolutions are intended to break a system with brutal force.

Little they can do to change the system and punish the guilty politicians without money-based foreign pressure, primarily from France, the EU, the US and the wealth & influence of the Lebanese diaspora (émigrés abroad).

I never trusted any of these protesters. If I want to take a guess most leftist/environmentalist/Greens. Like what is that Hizb 7 stand for? They rail against the government, yet most of them want government to run everything and provide everything.

they will have my vote