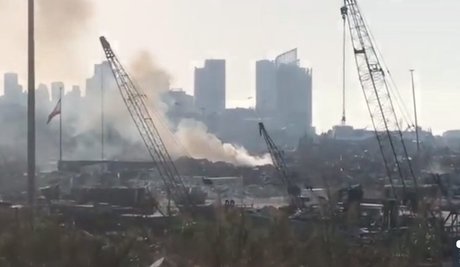 A new blaze erupted Tuesday at Beirut port, sparking panic among the citizens of a nation still reeling from the cataclysmic August 4 explosion.

Around two hours later, the army tweeted that the fire had been doused.

"Units from the Lebanese Army's Independent Works Regiment assisted by Civil Defense members and the Beirut Fire Brigade have managed to extinguish a blaze that broke out at Beirut port in rubble mixed with waste, wood remnants and old tires," the army said in the tweet.

The National News Agency meanwhile described the blaze as "minor," adding that it broke out in "rubble from the remnants of the blast that had been placed in a yard for collecting waste."

Videos and photos of the white smoke billowing from the port were circulated on social media with some warning people to stay away. The fire was a reminder of the flames and smoke that preceded the massive blast last month that traumatized the nation.

The Civil Defense told Annahar newspaper that the "burning" of rubble and remnants from the explosion was "taking place with the knowledge of the army, which requested assistance from the Civil Defense as a precaution against the spread of the fire."
If this is true, they should have informed the population to avoid panic. Country run by amateurs on all levels