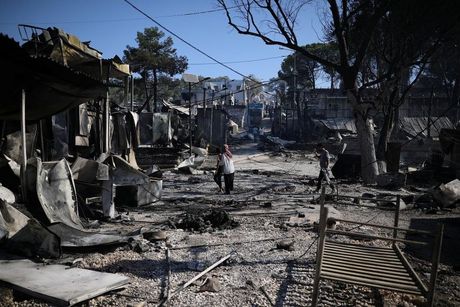 Thousands of asylum-seekers were without shelter Thursday after a fire gutted Greece's largest migrant camp, prompting wrangling among European nations over their responsibility towards refugees and calls for urgent reform of the current system.

A second fire on Wednesday evening aggravated the crisis on the island of Lesbos, where authorities have declared a state of emergency.

The first blaze, which began hours after 35 people tested positive for coronavirus at the Moria camp, sent thousands fleeing for safety into surrounding olive groves -- but nobody was seriously hurt.

While European countries from Germany to Norway -- along with EU chiefs -- responded with offers of help, Greek officials sought to blame migrants for the fire.

Stopping short of alleging arson, Prime Minister Kyriakos Mitsotakis said the blaze was down to a "violent reaction" in the camp to virus testing.

Migration minister Notis Mitarachi said asylum-seekers had started the fire because of quarantine measures imposed after the positive tests.

Most of the migrants were sitting on the roadside between the camp and the port of Mytilene on Wednesday evening.

"What are we going to do now? Where can we go?" said Mahmout, an Afghan, as his compatriot Aisha searched for two of her children.

"We lost everything" in the fire, said Cornille Ndama from DR Congo.

"I have nothing, nothing with me, and yet we don't know where we are going to sleep," he said.

Of 3,500 migrants whose dwellings were destroyed, the most vulnerable would spend Wednesday night on a ferry at a nearby port, with two Greek navy vessels providing additional sleeping berths on Thursday, said Mitarachi.

On Thursday, EU vice-president Margaritis Schinas was set to visit the camp before meeting Mitsotakis in Athens.

The second fire, late on Wednesday, broke out in part of the camp that had not been badly damaged.

"Moria finished!" shouted some migrants as they headed down the road towards Mytilene.

Officials have declared a four-month emergency and flown in riot police after reports that security forces had blocked migrants from reaching Mytilene.

Since becoming one of the main gateways into Europe for migrants and asylum-seekers in 2015, Greece has built dozens of detention centres on its islands, but people often face long waits in the camps and overcrowding is common.

The fire at Moria -- which houses more than 12,000 people but was designed for just 2,800 -- raised questions about Europe's asylum system, with Germany leading the way in calling for an overhaul.

"We urgently need a common refugee intake programme among as many EU countries as possible and finally a common asylum and migration policy for the EU," said minister for Europe Michael Roth.

Several thousand people in cities across Germany staged rallies on Wednesday calling for their country to take in migrants from the camp.

People are supposed to apply for asylum in the first EU country they arrive in before being relocated if they are successful -- but the system has been widely derided, as some countries barely accept any refugees and others like Greece and Italy bear the brunt.

The International Rescue Committee was among groups arguing it was "high time" other EU countries helped Greece relocate migrants. The Council of Europe blamed a lack of solidarity for the catastrophe.

Norway has offered to take 50 Syrians from Moria, while Greece and the EU have promised to pay for 400 unaccompanied youngsters to be taken to the mainland.

EU chief Ursula von der Leyen expressed her sympathies, adding: "Our priority is the safety of those left without shelter."

But Austrian Foreign Minister Alexander Schallenberg ruled out taking in people from Moria.

"The shouting about distribution (of people) can't be the solution," he told public broadcaster ORF, adding it would encourage people-smuggling.

"If we empty the Moria camp, it will fill up immediately again."

He added that Austria had offered one million euros ($1.2 million) in help.

The first fire destroyed the official part of the camp, which housed roughly 4,000 people, ministers said. Another 8,000 lived in tents and makeshift shelters around its perimeter, many of which were badly damaged.

Officials have been trying for months to build a new camp on Lesbos to replace Moria but locals have resisted, clashing with riot police to prevent construction from going ahead.

Government spokesman Stelios Petsas warned that it would be a "titanic" task to shelter the homeless and track down those infected.

The government has in recent months moved thousands of refugees from Lesbos and other islands to the mainland.

But many refugees have been unable to find places to live or jobs after leaving the camps, and the government has recently scaled back housing and cash benefits.