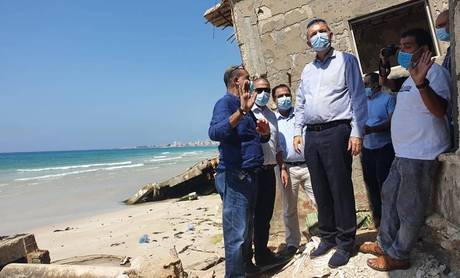 The Commissioner-General of the United Nations Relief and Works Agency for Palestine Refugees in the Near East (UNRWA), Philippe Lazzarini, on Monday began his first official visit to Lebanon since he assumed his post on March 18, UNRWA said on Tuesday.

Accompanied by the Director of UNRWA Affairs in Lebanon, Claudio Cordone, Lazzarini’s visit started at the Siblin Training Center where he engaged with young Palestine refugee students about their aspirations and their concerns. He also visited the building that was refurbished to accommodate Palestine refugees in need of isolation because of COVID-19.

The Commissioner-General then visited the isolation center and the UNRWA clinic in al-Buss camp, where he was briefed on the health services that Palestine refugees continued to receive under new measures and procedures because of the COVID-19 pandemic.

The visit included the recycling site, the sea wall and the damaged homes in Rashidieh camp, where Lazzarini met with a group of sanitation laborers to thank them for working alongside frontline staff under the current difficult conditions to help raise the level of safety and hygiene for their communities.

“Coming back to Beirut in my new role but after the shock of last month’s explosion is very compelling,” said the Commissioner-General. “The time I spent with UNRWA colleagues, with people who live in Palestine refugee camps and with representatives of the Popular Committee and the Camp Improvement complemented my knowledge of the complex situation of Palestine refugees in Lebanon.”

As all UNRWA school children have started going back to learning across the region this month, Lazzarini met the school parliamentarians in Tyre area to listen to their views on issues related to education and their concerns about the limited prospects that await them after they graduate.

“Keeping young people motivated and helping them believe in their future is key to the stability of any society,” said the Commissioner-General. “Giving young Palestine refugees education and skills is at the center of our programs. It is crucial to help them be productive agents in their community and to support their access to the labor market.”

Lazzarini will also hold meeting with Lebanese and Palestinian officials in the coming days to discuss issues related to Palestine refugees and the work of UNRWA in Lebanon.

Per diems, it's all about the per diems.