Adib 'Won’t Step Down' at the Moment, Govt Talks Extended until Sunday 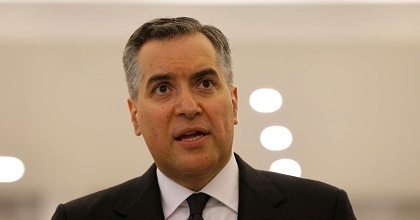 Prime Minister-designate Mustafa Adib will not step down and is expected to visit Baabda for Cabinet talks, but without carrying a lineup format, LBCI television reported on Thursday.

The station added that Adib was likely to meet with Speaker Nabih Berri after he meets President Michel Aoun for government formation consultations.

Aoun-Adib meeting was postponed until 5:00 p.m. Thursday, said the National News Agency. It was initially scheduled to take place Thursday before noon.

Adib was poised to step down from his mission to form a government if no breakthrough was achieved in the next 24 hours.

A statement by French President Emmanuel Macron's office said on Wednesday it regretted that Lebanese political leaders have failed to form a new government in line with a commitment made to Macron, but that it was not too late to do so.

The statement came after Lebanese politicians missed a 15-day deadline to form a crisis Cabinet, with many remaining deadlocked on Wednesday on which political faction gets to have the key portfolio of the finance ministry.

The deadline was set as part of a French initiative by Macron who has been pressing the leaders in Lebanon to form a Cabinet made up of specialists who can work on enacting urgent reforms to extract the country from a devastating economic and financial crisis.

So again this isn't going to be an independent and capable government of technocrats.... No hope for Lebanon. The dollar will soon be worth 30 0000 LL . More starving Lebanese will take the sea on dinghies

Not what Lebanese are expecting. Back to corrupted system. No vision no courage no understanding of this historical opportunity. Millions greatly disappointed. No politician in Lebanon's history had the chance and support you had for real change. What a wasted opportunity. One in a million. All hopes now deflated! Please resign before people anger turns against you!

If you resign today, you would have done the honorable act, showed courage and determination, and not allowed dirty politicians from corrupting you. You would gain our respect and hopefully we'll see you in another encounter. Please make sure first to submit your cabinet list to Aoun so the responsibility of whom rejecting your cabinet is clear to Lebanese and the world.

You said the following: Back to corrupted system. No vision no courage no understanding of this historical opportunity. Millions greatly disappointed. No politician in Lebanon's history had the chance and support you had for real change.

It is not fair to judge from a distance we don't know what France and the US asked,pressured or convinced him to not resign. Personally I believe no one is able to solve this problem, the only possibility for Lebanon, is 2 Lebanon or no Lebanon

Talks of what? Clearly the duo won't relinquish the Finance/Treasury, so step down already. There is no hope for this country. I have been saying for a while now, let the system completely collapse. It's the only way.

I think the situation is more serious than the politicians realise, what is going on here is the disappearance of the Lebanon we know, the map of the middle east will be revisited , Lebanon is a negotiation item to solve a.o bigger topics : the Kurds, Iraq, Syria, and the Palestinians. Russia and the US will redistribute the Middle East, they have evidence that the Lebanese can't co-exist together, Mind you Kissinger have said decades ago creation of Lebanon is a mistake the population is too diverse they can't be a nation. now our politicians confirmed what Kissinger meant.
A piece of Lebanon will be sacrificed to Syria because they will loose a piece for the Kurd , the Palestinians will have something from the south , The western Lebanese will keep Beirut and mont Liban. If this will bring peace why not1

I am so disappointed how narrow minded the politicians are and , with all respect most of the readers of Naharnet, that they focus on micro details that they don't see the big picture, they can be easily distracted from the main long term objective, penny wise pound foolish attitude!
wish you all the best this is my last comments.