Army Disposes of 1.3 Tons of Fireworks Found at Beirut Port 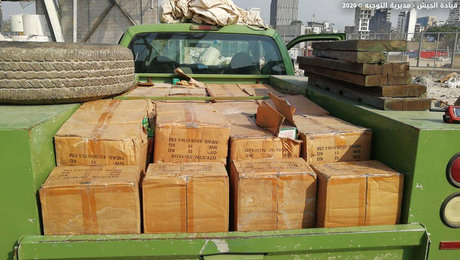 The army on Friday announced that it has disposed of 1,320 kilograms of fireworks found by its units at a Beirut port hangar during an ongoing inspection process.

“As part of the inspection works that army units are carrying out at Beirut port, 1,320 kilograms of fireworks were found packed in 120 cartons at one of the hangars,” an army statement said.

“Troops from the Engineering Regiment immediately removed them and disposed of them at fields belonging to the army,” the statement added.

An FBI team has reportedly deduced that a fireworks cache was behind the August 4 detonation of around 2,750 tons of ammonium nitrate that had been stored at the port’s Hangar 12. Other flammable substances had been also placed in the same hanger. The resulting explosion, one of the biggest in the world, killed around 200 people, wounded around 6,500 and devastated entire neighborhoods.

Lebanese authorities have been blasted for their negligence in the wake of the disaster.

I can’t but wonder how did the LAF “dispose of the firework”. Knowing Joseph Aoun, he most likely dumped it in the Mediterranean Sea.... les chiens ne font pas des chats, à Aoun is a Aoun....

Do we have pictures how they were disposed or another politician will call Aoun and try to convince him to sell back to China and make few extra dollars.

Why dispose them and not deliver them to the owner who bought them? Always we hear half the story not the full entire end to end story. Who bought the fireworks, names please, are they legit then give them to the owner instead of the corrupt port employees asking the owner to pay port fees to store them unsafely so they can make extra dollars. Then a disaster occur.