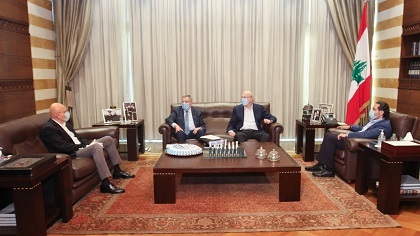 Former prime ministers of Lebanon emphasized the importance of the French initiative saying it could be a true chance to save Lebanon from “collapse and sedition,” the National News Agency reported on Saturday.

“The initiative of French President Emmanuel Macron represents an important opportunity that must be invested in speeding up the formation of the government to keep Lebanon away from collapse, sedition and evils surrounding it,” the PMs said.

They considered that Macron has sensed the magnitude of danger facing Lebanon therefore creating “an initiative to provide support and assistance.”

They said Macron has also “launched an integrated political initiative for a solution translated through commissioning Mustafa Adib to form a government. It should work,” the prime ministers stated.

Urging the PM-designate Mustafa Adib to adhere to his powers regarding the formation process, they also urged him to “consult with the President under the rules stipulated in the constitution.”

No it's not a true chance. if it was they would've put their foot down and said 15 days is 15 days. Either accept as is or we're out.

These for PMs though? I better keep my mouth shut. The least said the better. Otherwise I'll be banned from here and create problems.

Did the four say that sectarianism should be removed from the Constitution?