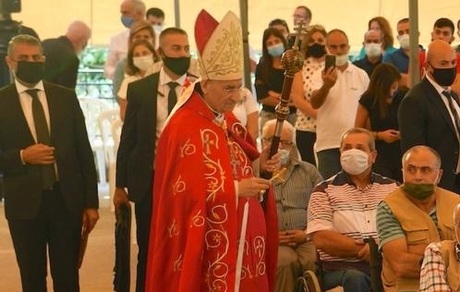 Maronite Patriarch Beshara al-Rahi on Sunday hit out at Hizbullah and Amal Movement without naming them, in connection with the ongoing row over the finance ministerial portfolio.

“What entitles a sect to demand a certain ministry as if it owns it, what entitles it to suspend the government’s formation until it gets what it wants, causing political paralysis and economic, financial and social damages?” al-Rahi said in his Sunday Mass sermon.

“Where is the three-point agreement among political forces for reform: a small rescue government, independent and specialist ministers who have political experience and a rotation of portfolios,” the patriarch added.

Noting that Article 95 of the Constitution “does not allocate a ministry to a certain sect,” al-Rahi wondered whether a new amendment is being “imposed by force.”

“Our rejection of monopolization is constitutional and not sectarian or targeted a certain sect, but rather against a novelty that contradicts with the principle of equality between ministries and sects,” the patriarch explained.

Addressing Prime Minister-designate Mustafa Adib, he called on him to “abide by the Constitution and press on with the formation of a government that the people and the world are awaiting.”

“There is no need for bowing to conditions nor to delay or stepping down,” al-Rahi went on to say.

The patriarch also said he will not accept changes to the political system “amid the presence of mini-states.”

“What benefit will a change to the system carry amid the hegemony of chaotic and illegitimate arms,” al-Rahi asked.

This demonstrates once again that the ongoing sectarian system doesnt work. These crooks must go and the constitution must be revamped.

I just commented on the above on a different article:

6 hours ago Patriarch al-Rahi: What entitles a sect to claim that it owns a certain ministry and to paralyze the country and cause economic damage to get what it wants?

Let me answer that question for you Patriarch Al-Rahi:

1) What entitles a sect to claim that it owns a certain ministry and to paralyze the country and cause economic damage is the ILLEGAL weapons that you and Aoun have agreed too.

So, please do a self-assessment, look in the mirror, and ask the Lord for forgiveness.

It would be a heresy to call Shiism a religion!

Yes, he did do that with the Vatican’s blessing at the time out of necessity thinking, along with Aoun, that that’s the best approach given hizb arsenal. Of course, in hindsight it was a mistake though Aoun’ mistake was bigger.
Then reality hit and a check and adjustment was in order and he did just that. Mind you I’m one who subscribes to separation of church and state but this is Lebanon and we need all the help we can get.

God bless Maronite Patriarch Beshara al-Rahi aka the Grand Ayatollah of Lebanon for supporting the resistance and President Aoun and preserving the constitution.

Now you realize that Hezbollah runs the state? Next you will get summoned by a judge for insulting berri or the Shia and inciting strife I the country same as the judge did to Ameen who visited you.

The first half of your comment is completely acceptable, however why do you think that the Christians have to leave the country?