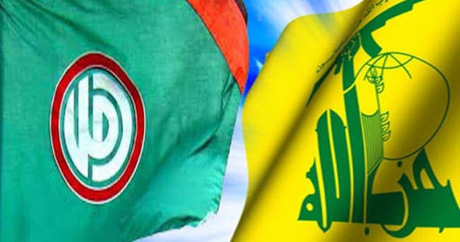 The Shiite duo, AMAL Movement and Hizbullah, have shown no leniency in relinquishing demands to retain the finance ministerial portfolio and to name their ministers in the upcoming government, al-Joumhouria daily reported on Tuesday.

“Not in a hundred years will they take the finance ministry from us. Just as we won’t accept them to annul us and let them name our ministers,” sources of AMAL and Hizbullah told the daily on condition of anonymity.

In a clear hit at the Shiite duo’s ally, President Michel Aoun's Free Patriotic Movement, the sources added: “Some have been indolent in this matter for personal reasons maybe, but we will not back down or relinquish these two demands no matter what.”

PM-designate Mustafa Adib's efforts to form a government have been effectively blocked by the two main Shiite groups in Lebanon's usual power-sharing arrangement.

Observers have said their insistence to keep the finance ministry under their control is linked to recent US sanctions against a former minister from AMAL, as well as Hizbullah-linked businesses.

Adib is under pressure to form a fresh cabinet as soon as possible, so it can launch reforms required to unlock billions of dollars in foreign aid.

Seems like the Iranian decision has been made to burn the country while they wait for the US elections. They've decided to drag the country to hell with them rather than letting go of Lebanon. These militias will be the end of Lebanon.

The Shia duo along with the Useful Idiot single handedly bankrupted Lebanon, a country with the highest human potential and worldwide successful diaspora in the region. The Shia duo are a curse on the Shia community and on all of Lebanon. Hizbollah is an occupation army working for foreign agents. Time to liberate Lebanon. Time for a referendum on a smaller Lebanon.

Eliminate the finance ministry and dissolve into the other ministries---let Barry and kizb stfu. khalil bankrupted this country in 5 years by systematically allowing kizb and others to bypass customs and allowed them to smuggle their goods into and outside the country without paying and even took a cut from it himself. I am sure Barry took his cut also and now that the money is gone, barry needs money to buy more supporters and more flags.

There is NOTHING written nor agreed on on which these liars and thieves are basing their arguments. they are just following iran's orders to delay the government.

Did we even have a finance ministry?
If we ever did then we would not have dropped from eastern Swiss land and small Paris Beirut.
Eliminate the finance ministry and go to parlement to vote for the government and let everyone vote with or against it.

More yes means a gov and more no means no gov

‘Never in a Million Years’ would we the shias of iran give up on the finance ministry. Sayidnaa al Hussain specifically entrusted the shia with the Finance ministry.

this duo sent lebanon back to the stone age

The Shia cancer is refusing to let go..... Lebanon must develop an immune therapy to beat it.

Civil war era protagonists don’t belong in any government in 2020 and onwards.

They need this money from the finance portfolio to pay the thousands of shiah brethren and keep them quiet and brainwashed.

You'll never know maybe the Ayatollah will change his mind and command you to relinquish the finance portfolio before that, maybe sometimes after the US presidential elections?

In a pseudo-dictatorship it is essential for the dictator to control the finances.