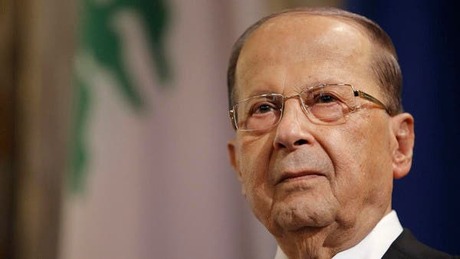 President Michel Aoun called on world leaders on Tuesday to secure the safe return of Syrian refugees in light of Lebanon’s crippling crises.

“We call on the world to help us secure the safe return of displaced Syrians because Lebanon is groaning from the brunt of unprecedented crises rendering it incapable to further host the largest number of refugees per capita,” said Aoun at the UN 75th anniversary.

He praised the support and assistance provided by the UN organization and friendly countries after Beirut's port explosion.

Aoun, affirmed “Lebanon's attachment to the noble principles of the United Nations and its charter," calling for the "introduction of necessary reforms in the way this international institution works to double the effort to help countries in need for a better future.”

Should worry more about the LEBANESE LEAVING LEBANON---these are the educated ones---not the followers of any political parties. You know--maybe address the TALENT DRAIN instead of worrying about kizb is telling him.

Michel aoun you are useless

Some say this is not the most pressing matter facing the country now. Others say he is heartless. And here is our strong Christian president proving all of the detractors wrong. A day after he's established that he's leading Lebanon and the Lebanese people to hell, broke, he is concerned about the welfare of the Syrian refugees and that they will be coming along with us. What a softy!

Aoun could only get girls.... it’s gotta mean something for a taratata General.

Just send the army and kick the refugees out... they are now officially richer than Lebanese people: they get cash aid from the impotent UN in USD, they get free electricity, free schools, they take Lebanese jobs... Lebanese people get NOTHING!!! How unfair is that? Damn you Aoun, you're a traitor sold to Syria and Iran, you will go (soon) to the garbage of history