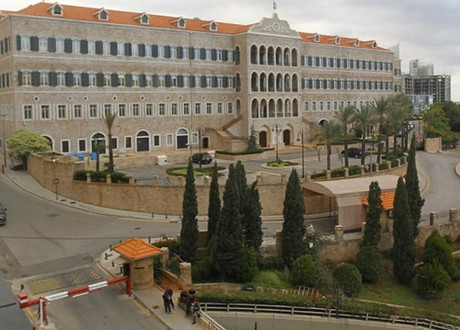 Hariri suggested to help PM-designate Mustafa Adib name a Shiite finance minister after the insistence of Amal Movement and Hizbullah to retain the portfolio.

The daily said negotiations gained momentum at night yesterday “to put the final touches on the cabinet lineup.”

It said in the event that a final form of Lebanon’s crisis government was drafted, Adib will likely “visit President Michel Aoun this afternoon in Baabda to present the cabinet format, amid a French and European urgency.”

Hariri said in a written statement Tuesday that he “decided to help Adib find an exit through naming an independent finance minister from the Shiite sect who would be chosen by him, similarly to the rest of ministers, on the basis of competency, integrity and non-partisanship.”

The French foreign ministry on Tuesday had urged competing political forces in Lebanon to agree on forming a government "without delay" as it ramped up pressure for a new cabinet in the crisis-hit country.

Adib has been unable to form a new cabinet, which is required to unlock billions of dollars in foreign aid, because of disagreements between political parties.

Adib's efforts have been effectively blocked by the two main Shiite groups in Lebanon's usual power-sharing arrangement -- Amal and Hizbullah.

What Macron and company (Lebanese political mafia) don’t realize is that i will never as an expat working abroad never send my money back to Lebanon so long as Berri Aoun and Harriri mafia are still mentioned in the news... AND i hope france is successful in helping the mafia make a government.... that very moment that foreign help comes i and many expats will withdraw our locked money out of the system... macron don’t you get it you are not instilling confidence in the Lebanese by bringing back the criminal elements that have ruled forever... the STUPIDITY of a sect asking whole ownership of the finance ministry when that ministry was the massive culprit over the years. Tfea!!!

Lebcan,
Lebanon is a collection of religious tribes that live SEPERATELY from one another. There is no common ideology, religion or culture, and no civility or compassion between them. moving between each tribe is like moving from one country to another. -Before the 70's, JUST ONE tribe was robbed the purse and the tribe prospered. The rest of the tribes were LESS THAN PASSANTS. You could easily see that if you have traveled away from the "Paris of the Middle East" and due north, south or east. -After the 70's -The Taif agreement- All other tribes where allowed to share the purse.

Well, the purse is not large enough for all of those thieves all at once.

There is no bond between Lebanese. Other than hate, misery, and disdain, name me one thing that bond them together? Look at our passports, we are Sunnis, Shias, Marionets, Orthodox Lebanese. We are identified by our religion.

United we stand, divided we fall!

So in the end the shiites and huzbullah get what they want. So what's the difference? This is not a government that the people want and not one promised by Adib. So now any sect can say I want ministry X and so it should be given to them. What a fiasco.we still remain in the clutches of terrorists.

Will these loser politicians ever die and go to hell? a one-eyed monkey would do a better job

billionaires in Lebanon must be eliminated to bring our motherland back to life and reality.