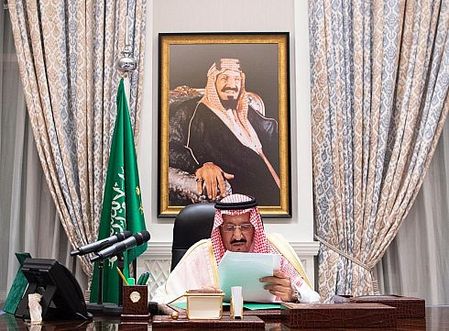 Saudi King Salman bin Abdul Aziz on Wednesday blasted what he called Hizbullah’s “hegemony” over Lebanon and said the Iran-backed party should be “disarmed.”

Speaking to the U.N. General Assembly, the monarch stressed the kingdom’s support for the Lebanese people following the humanitarian tragedy resulting from the catastrophic August 4 blast at Beirut port.

Charging that the explosion is “the result of terrorist Hizbullah’s hegemony over decision-making in Lebanon through the force of arms,” King Salman said Hizbullah’s influence has “paralyzed the state’s constitutional institutions.”

The crooked king, Erdogan is slowly taking over as the head of the Sunni in the world even for Lebanon.

Everyone knows it was Pro Saudi government that made the storage of chemicals in the Beirut port 6 years ago.

You write this like we, Sunni and Lebanese care about KSA losing its #1 spot as region influencer. Dude, we Sunni and Lebanese only care about Lebanon unlike your Shia kind whom never managed to fit in the Lebanese society because you’re too focused on Iran, Yemen and Iraq. You should probably relocate, you’d be amongst other subhumans like you always wanted.

Tell that to America your heroes. They are experts when it comes to interference in other nations.

You should care, because they are fighting each other for influence, Saudi and Erdogan

There's your problem, S. on a Shingle: you've got God and Satan confused.

Agreed , however this will never happen. Hezbollah believes it’s a religious duty to keep his arms therefore we can forget about it disarming.

No @logik. They are not the same. KSA used to put billions of support for the Lebanese army and Lebanon's economy.

Iran puts billions into arming one third of the population to bully the other two thirds.

Make no mistake. The first is an authocratic but friendly regime. The second is a criminal invader of Lebanon.

And the worst part is that the criminal midieval iranian regime was able to buy our shias for the measly sum of 1 billion dollars a year. Just to tell you how cheap we were sold at.

You think the "one third" has no allies in Lebanon and the two third are slaves for the Israeli, American (Israeli) alliance, Saudi Alliance?

You accept my figures for the demographic split in Lebanon. Then why can the Christian third elect half of the Chamber of Deputies under Article 24 of the Lebanese Constitution?
Until such time as the Chamber enacts new electoral laws on a non-confessional basis, the distribution of seats shall be according to the following principles:
Equal representation between Christians and Muslims.
Proportional representation among the confessional groups within each of the two religious communities...

While I agree that Hezbollah’s hegemony facilitates the sheer incompetence and corruption that allows incidents like August 4th, statements like these especially by the Saudis will only serve to reinforce the zeal of Hezb supporters. One could argue that there is global ‘momentum’ for action on Hezbollah between sanctions and political pressure but declarations like these are not very strategic.
Hizb is just going to double-down on their propaganda that the world is conspiring against them.

Well, perhaps he’s trying to shake the coconut tree to see if something will happen.... it’s a shame France and the EU including Great Britain are only focused on rebuilding Iran for tens if not hundreds of billions worth of juicy contracts.

Again these democracies are accepting the Chinese genocide of Tibetans and ouïgours and are still dealing with them because they’re buying German , French cars, airplanes etc....

The world is rotten. I’m glad Donald Trump is toying with them.

Chinese genocide of Tibetans and ouïgours???

I think Trump is pressuring Iran and Hezbullah in order to drive it into putting the Lebanese public, two thirds of whom are Muslim (supposedly, likewise for Christians: how does a government tell the "confession" of a citizen?), on the street to abolish the Article 24 set-aside of half of the parliament to Christians. Why doesn't Hezbullah do this on its own?

The kingdom used to be smart by buying everyone. Now they are in debt with millions of Saudi nationals and think that only Israel can save them.

WHY can't Lebanon have the same freedoms and democratic institutions Saudi Arabia has?

are you looking for the same freedoms as Iran perhaps?

I can see why they call you "hammerhead".

Well the King is 100% right.. Kizb should be disarmed... And sadly, Kizb and the mafia have done 1 billion times more damage to Lebanon than Israel and Saudi combined...

The explosion in Beirut’s bay, which killed hundreds of people, proves that Hezbollah are storing large amounts of explosives between innocent citizens!
Were the explosives stored for fun? For people’s sake? No, they were used for terrorist attacks carried by Hezbollah.

Hezbollah are facilitated by Iran. They serve Iran’s agendas in the region. They destroy Lebanon and kill its citizens; obeying Iran by doing that!

Hezbollah are a dangerous terrorist group who aim for power regardless of people’s sake and wishes.
They cover their actions with an Islamic layer; for supporters, but they are not by any means representing Islam.