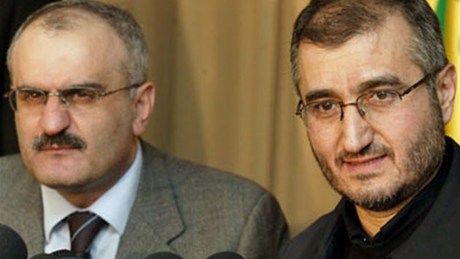 MTV said the conferees discussed the standards for naming ministers, noting that al-Khalil and Hassan Khalil did not present any names "although one of them was carrying in his pocket a list of Shiite candidates for the finance portfolio."

Hassan Khalil had earlier in the day said that his movement wants the French initiative to succeed and the new government to be formed quickly.

“A positive drive regarding the government’s formation occurred over the past days and we will deal with it with the highest levels of responsibility and openness,” he added, after he met with Grand Mufti Sheikh Abdul Latif Daryan along with an Amal delegation.

“Strenuous efforts are being exerted, and it is in everyone’s interest to be optimistic, and this optimism is based on some concrete facts,” Hassan Khalil went on to say.

“We are keen on ensuring the success of PM-designate Mustafa Adib and on offering him all support in the coming period,” he added.

God bless Hariri for asserting shia rights over the Finance ministry and facilitating the meeting of the two Khalils with PM designate Adib.

The only photos I ever see of Lebanese politicians on Naharnet which inspire confidence are those of Hezbullah. The photo of the two Khalils today even demonstrates the difference between a Shia who stands up for the idea of legitimate government and one who sells out. Anybody could pick out which is which in the photo: "tell me which is the sell-out to NATO-EU". If you say Iran has bought Lebanese Shias (but how exactly do you assign people to these categories?) by support for Hezbullah, I'd say, "Show me the money." Why doesn't Europe/US ever say a word about the 50% set-aside of legislative seats to Christians--except for Macron agreeing with Aoun now that sectarianism has to be abolished? If Europe/US wants to understand Lebanon's fragile state, here is the explanation: 30% of the voters electing 50% of the legislature. At least in/with KSA you know whom you're dealing with (but an Arab Summer might be on its way, not that Trump intends that, though I think he does).

Ya Ali it burns you to hell and back that there are Christians in this world right? In your world everyone should be a Shi3a like you or should not exist. Sorry Ali but the world is unfair akin to your relgiously biggoted thoughts.
If it was not for the Christians of this world you would still be sitting on the ground in the dirt playing with your feet. But to fair you would still be able to worship your stick or stone.

corrupted POS... wears 50000$ patek philippe and pretends to be close to his people...

On the left, an Amal caca, on the right, a Hizbala terror caca.

Why such basic words ? Because once must use primitive words to describe primitive beings.