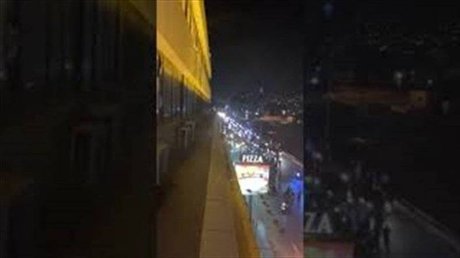 The public prosecution on Thursday continued looking into the rival lawsuits filed by the Free Patriotic Movement and the Lebanese Forces over the recent clash between their supporters in Sin el-Fil’s Mirna Chalouhi area.

“He will continue later the interrogation of members of the two parties who were involved in the clash,” NNA added.

The September 14 clash took place outside the FPM headquarters. Videos circulated online show gunfire erupting during the presence of a large convoy carrying LF supporters on the highway outside the HQ.

The headquarters’ guards fired in the air after the tensions erupted with the LF supporters.

The videos also show the LF supporters shouting insults against the FPM.

According to TV networks, the two sides hurled stones and sticks at each other before the army later intervened in force and separated between them.

Were any of the shia thugs that attacked the protesters ever arrested or even questioned?

There is a time when even justice brings harm. Sophocles

Why were they arrested ? The aounists were shooting in the air with a deadly weapon... that’s so unfair!