Qabalan: Yes, We Insist on Naming the Shiite Ministers 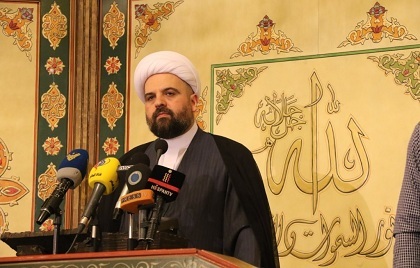 Grand Jaafarite Shiite Mufti, Sheikh Ahmad Qabalan insisted on Friday that Shiite ministers in the delayed government will only be named by Shiite officials.

“We insist on naming our ministers and refuse to have them named by anyone else,” said Qabalan, noting that “its either a non-sectarian system for all in Lebanon away from quotas, otherwise let each sect name its representative in the government.”

“Yes, this is our position as long as we live in a State of sects and Taef (accord), and until everyone is convinced of a civil state away from sectarianism and fanaticism into a state of law, institutions, rights and duties on the basis of competence,” added Qabalan.

God bless Grand Jaafarite Shiite Mufti, Sheikh Ahmad Qabalan for insisting on naming the Shia ministers and claiming our rights to the Finance ministry and hopefully the Presidency.

What are Qabalan’s qualifications? What entitles him to pick the ministers? He’s uneducated.... and no, having a PhD is theology isn’t a real qualification.

Did Diaperhead Jr forget how the Mikati Mark II and the Diab premierships came about and who chose them?

Iran will keep stalling till after the American elections and to hell with Lebanon, this was said back in August.

Great, your community seems perfectly aligned in hopes, aspirations, objectives, militarism and lack of democracy and freedom with Assad. Please take your community of 100% supporters and join Syria. We'll happily redraw Lebanon's borders. Your policies by force of arms and traitors have brought Lebanon to the abyss and created misery for all, similar to what is happening in Iran by their criminal leadership. Hizb and Berri has impoverished the Country, assassinated our leaders, enriched themselves with money laundering and drug trade while creating misery for the rest. You have transformed the country with the best human resources and education into a beggar state with no honor or dignity or sovereignty. Go away and join Syria for the sake of our kids, their future, and our freedom and democracy.

And you are aligned with who?

The democratic path is for Lebanon to abolish sectarianism and concurrently eliminate all militias that compete with the national armed forces. If the militias are retained there is no democracy so everything else is irrelevant.

Yes, abolish sectarianism but the 150,000 missels will be targeted against your terrorist Israeli existence because Lebanese have a right to defend themselves.

150000 missiles are only to protect Irans intrests and to destroy lebanon..if you want to protect Iran go and do it from Iran ..only traitors defend other nations while destroying there country..

Bigjohn ... there must be a national defense strategy which will have to include a draft and a national reserve similar to that of Switzerland or Israel

You are the only person here commenting who supports the October 17 movement. You have here a paid Israeli under 10 names, a couple of M14 supporters , and a couple of M8 supporters.