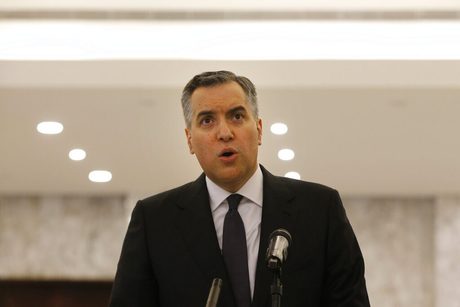 TV networks said the meeting did not achieve any progress regarding the hurdles related to Shiite representation in the new government.

“The two Khalils did not submit any names and Adib did not inform them whether or not he intends to step down tomorrow,” LBCI TV reported.

LBCI had earlier reported that the conferees would discuss merging Adib's list of Shiite candidates with that of the Shiite duo in order to “pick the common names.”

Al-Jadeed TV meanwhile reported that there were efforts to “convince the Shiite duo to name the finance minister and accept that Adib name the other Shiite ministers.”

MP Sami Fatfat of al-Mustaqbal bloc told LBCI that Adib “has a ready cabinet line-up” and that “the ball is in the court of the President and the parliament speaker.”

Ex-PM Najib Miqati meanwhile warned in remarks to MTV that Adib might step down on Saturday should the deadlock continue.

The PM-designate is scheduled to meet with President Michel Aoun at 11am Saturday. He also held a 40-minute meeting with Aoun on Friday afternoon.

Lebanon’s problem is always the same, the thugs and the terrorists represented in the parliament. Something must be done about it.

Mr. Adib, if you resign on Saturday, you would earn Lebanese respect and would have proved to be a good and trustful candidate for next rescue government.

Absolutely gebran.
He is either a free man... or a puppet.

La2 wallah, 51% of voters boycotted the last elections 18 months ago. The parliament may be legal but it’s totally illegitimate. This means that the majority of the Lebanese understood how the ruling class is.... it would be interesting to get the percentages of boycott of each sect during the elections.

Logik, people have already evolved. I was told that 30 years ago people used to talk about being from East or West Beirut , which implied being Christian or Muslim. The problem comes from the uneducated, mainly Shia because their parents don’t value education. They built on their land and forgot that béton doesn’t feed a family.... they played a crucial role from feeding Lebanon, which was most honorable, to being street thugs, and drug dealers if not terrorists.

Education is the only way out, but in order to achieve this they need to stop listening to the Iranian freaks.