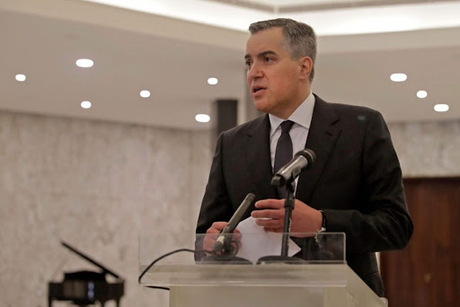 The problematic formation of a Lebanese government enters a “pivotal” stage with attention focused today on one more meeting between President Michel Aoun and PM-designate Mustafa Adib, after their afternoon talks a day earlier in Baabda, al-Joumhouria daily reported on Saturday.

“Depending on the positions of political parties and their insistence on naming their ministers, a series of consultations between the two presidents in Baabda will determine its path, either towards a Cabinet lineup or further complexities,” they added.

Adib said Friday after meeting Aoun that he “put the President in the picture of the consultations and we agreed to hold another meeting tomorrow at 11:00 am.”

The Presidency later announced in a tweet that Aoun and Adib "evaluated the outcome of the ongoing contacts," noting that the PM-designate "did not present any government format or line-up vision" to Aoun.

Adib is under pressure to form a fresh cabinet as soon as possible so it can undertake long-sought economic reforms.

But Adib's efforts to form a government have been effectively blocked by the two main Shiite groups in Lebanon's usual power-sharing arrangement -- Amal and Hizbullah.

President Emmanuel Macron, who has visited Lebanon twice in the wake of the mega Beirut explosion, had repeatedly urged the Lebanese not to waste any more time in forming a government.

Lebanon is reeling from an unprecedented economic and financial crisis adding to the coronavirus outbreak and a colossal explosion at the capital's port flattening large parts of the capital.