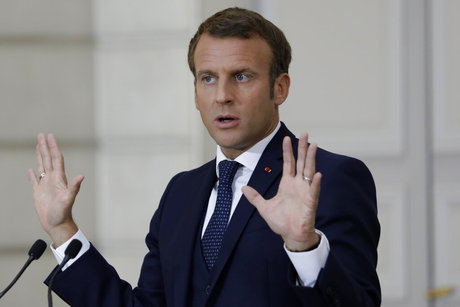 At a rare news conference devoted to Lebanon, Macron accused Lebanon's leaders of betraying their promises over the failure to form a government in the wake of the giant blast at the Beirut port in August.

Macron said the political elite had decided "to betray" their obligations and had committed "collective treason" by failing to form a government.

Macron had repeatedly pressed Lebanon's leaders to form the government, saying a reform-minded cabinet was essential if aid was to flow in to rebuild the country.

Lebanon's premier-designate Mustafa Adib stepped down on Saturday, saying he had been unable to form a reform-minded government.

"They have decided to betray this commitment (to form a government)," Macron told reporters, declaring he was "ashamed" of the country's leaders.

"I see that the Lebanese authorities and political forces chose to favor their partisan and individual interests to the detriment of the general interest of the the country," he added.

Macron said none of the leaders of Lebanon -- where in the wake of the 1975-1990 civil war power is traditionally shared between Shiites, Sunnis and Christians -- had been up to the task.

"All of them bet on the worst case scenario for the sake of saving themselves, the interests of their family or their clan," he seethed.

"I therefore have decided to take note of this collective betrayal and the refusal of Lebanese officials to engage in good faith."

Macron also sent a pointed warning to Hizbullah, which was well represented in the outgoing government and some analysts accuse of holding up the process.

Hizbullah should "not think it is more powerful than it is... It must show that it respects all the Lebanese. And in recent days days, it has clearly shown the opposite," said Macron.

"Hizbullah cannot be an army in a war against Israel and a militia taking part in Syria's war and still be a respectable party in Lebanon," he said.

"Amal and Hizbullah decided that nothing should change in Lebanon and I understood that Hizbullah did not honor the pledge it made to me. The failure is their failure and I don't bear its responsibility," Macron added.

The French leader also said that Hariri "erred by adding a sectarian factor to the roadmap" before eventually correcting his "mistake."

Macron, who visited Lebanon twice in the wake of the explosion, had repeatedly urged the Lebanese not to waste any more time in forming a government.

The August 4 explosion of hundreds of tons of ammonium nitrate at the Beirut port killed more than 190 people, wounded thousands and ravaged large parts of the capital.

The disaster sparked new protests over corruption and mismanagement, prompting the previous cabinet to step down.

The French president said that the roadmap for political and economic reform set out on his last visit on September 1 was still on the table but time was running out.

"It is now up to Lebanese officials to seize this last chance themselves," he said.

Mr. president, the ONLY thing that you can put on the table that our politicians and hizb will listen to is the language of force. Hizb will not peacefully let go of its arms or Lebanon and one thinks you should know that by now.
See how they trembled when the US wielded the stick? Nothing else will work kind sir.

I really don't agree SOS.
acron was on the contrary quite firm and critical towards Hezbollah.
I like what I heard...

President of France stop playing games with the Lebanese people. We demand swift actions, transparency and clarity. Therefore disclose the investigation regarding the transaction and all individuals involved to the people - the cheaters are OUT.

Every single Lebanese within the borders and abroad needs to ask him self a few questions. From a regional perspective, which side can bring stability and property to the country? From whom can I as a LEBANESE best benefit in regards to opportunity for my kindred and theirs generations onward? If YOU have a sense of patriotism, bridge the religious differences, and unite upon the kind of world you would like your progeny to live in.

Well the demands here are not in a specific materialistic sense as you seem to understand it. But rather applied on Macrons proposals being bulldozed by the Iranians time and time again, with the next knock delivered to your empty speeches in 4-6 weeks again. What kind of signals dose that send! 4-6 Weeks! Idiots been giving another deadline, till then Lebanese played by hopes and get emotionally frustrated. And the outcome, Iranians laughing. Be harsh and assertive. If you have facts regarding the transactions, make the documents public, pressure them, expose them use all means possible.

Further 18 officially recognised sects with all what it means, mosques, churches, religious- sermons beatings etc. Its about time to recognise further religions to that list, satanism that rules them all. The Devil and the 18 thieves. What a shame!

Macron: I hold all Lebanese leaders responsible for the failure, topped by President Aoun.

And he of course is oblivious to this....

the foreign governments all legitimised the current corrupt mafia ruling thieves and thugs..

I blame the western world for allowing good Lebanese to leave Lebanon to enrich their countries and at the same time allow a sudden demographic change in Lebanon with an ugly foreign facet to it...

Whatever these western countries say, I expect something completely different.

Destroy Iran= that will solve it all.

And you still call Israel the enemy.