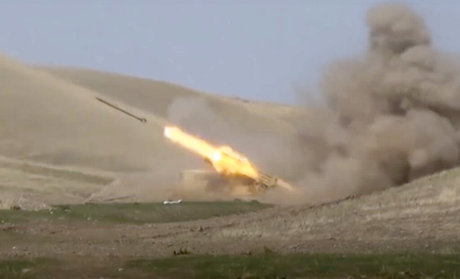 World leaders have urged a halt in fighting after the worst escalation since 2016 raised the specter of a fresh war between the ex-Soviet rivals Armenia and Azerbaijan.

The two countries have been locked in a territorial dispute since the 1990s, when Karabakh declared its independence after a war that claimed 30,000 lives.

No country recognizes Karabakh's independence -- not even Armenia -- and it is still considered part of Azerbaijan by the international community.

"Twenty-eight servicemen died in action" on Monday, Karabakh's defense ministry said in a statement on the second day of fighting.

The total death toll rose to 68 including nine civilian deaths: seven in Azerbaijan and two on the Armenian side.

Azerbaijan has not yet released information on military casualties since the latest fighting broke out.

Talks to resolve one of the worst conflicts to emerge from the 1991 collapse of the Soviet Union largely stalled in 1994 when a ceasefire was agreed.

Ridiculous people..., all of them. But I understand the Armenian people’s desires not to live under the Aliev dictatorship.

not ridiculous people,i advise you to look at history and see the map,
Azerbaijan with the help of butcher Erdogan and his Israeli allies helping in providing Drones and other military equipment.Erdogan is hiring Isis fighters to reshape the map and slaughter Armenians like what they did in 1914 massacre.

Or suffer more pogroms like in the late 80's.. They should redraw borders. If Azerbaijan can have a dislocated territory behind Armenia, then Armenia should have parts of the Nagorno-Karabakh where they are a clear majority.

Armenians are the native not separatist. Shame on you naharnet.

they are not separatist rebel fighters, they are soldiers of a parliamentary republic more democratic than our Lebanon.