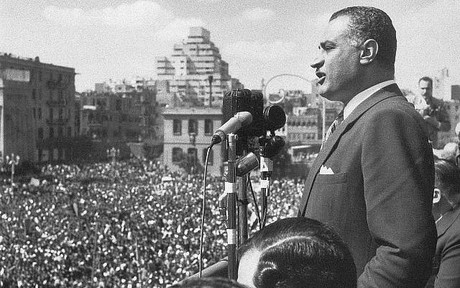 On September 28, 1970, Gamal Abdel Nasser, Egypt's charismatic pan-Arabist president, died from a heart attack in Cairo aged 52, sending shockwaves through the country and across the Arab world.

That evening, all radio and television stations suddenly interrupted their programs.

In a voice interspersed with crying, AFP wrote at the time, vice-president Anwar Sadat came on the air to address the nation and announce Nasser's death, at 6:15 pm local time.

Nasser had "passed away while standing in the vanguard of the struggle for the unity of the Arab people, and for the day of their victory".

Just a day before, Nasser had managed to get Jordan's King Hussein and Palestine Liberation Organization leader Yasser Arafat to sign a ceasefire, ending a conflict known as "Black September".

A heavy smoker and diabetic, the state of Nasser's health had not been revealed to the public, and his death came as a massive shock.

In 1952, Nasser had been one of the leaders of a popular military coup that toppled Egypt's monarchy, and he became president of the new republic two years later.

A leading proponent of pan-Arab socialism, he installed a one-party regime and ruled with an iron fist for 16 years.

His greatest victory was nationalizing the Suez Canal in 1956, sparking a crisis in which Britain, France and Israel colluded to attack Egypt.

After 10 days of fighting and with tensions soaring, Britain and France ceded and the canal reopened in 1957 under Egyptian control.

Nasser also oversaw the construction of the Aswan High Dam, inaugurated in 1964.

His greatest defeat came in June 1967 and the Six-Day War, in which Israel defeated Egypt, Jordan and Syria and occupied, among other territories, Egypt's Sinai Peninsula.

An official mourning period of 40 days was declared.

Mass outpourings of grief followed soon after Nasser's death was announced. In the upmarket Cairo suburb of Heliopolis, men, women and children wept in sorrow. In working-class neighborhoods, crowds gathered.

All through the night people expressed their shock and disbelief.

A crowd marched to Nasser's residence, then to the presidential palace where his body had been taken. The authorities called on the army and tanks to block the roads.

In the northern city of Alexandria, shops were shuttered and cinema screenings were interrupted.

On September 29, condolences flooded in from around the world and newspapers headlined with the tragic news.

In Cairo, life came to a standstill. Offices and shops were all closed. Young people travelled to the city center from the suburbs, carrying flowers and holding portraits of Nasser.

On October 1, Nasser's coffin, draped in the Egyptian flag, was placed on a gun carriage drawn by eight horses and surrounded by 40 army generals.

Five thousand military school cadets marched behind them in the procession. Nasser's army colleagues took their position, followed by heads of state and foreign leaders.

Helicopters and fighter jets flew above Cairo. A 21-gun salute was fired.

A crowd estimated at several million-strong followed along the route of the procession, stretching some 15 kilometres (nine miles). "Long live Nasser," they chanted, "There is no God but Allah."

Orderly at first, the ceremony descended into chaos as the crowd forced the carriage to stop several times.

Calm was only restored inside the mosque where the imam presided over a religious ceremony.

Allah yir7amo. A real Arab leader that everyone listened to.