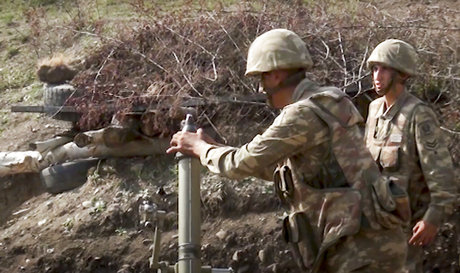 Lebanon “regrets the eruption of hostilities in the region of Nagorny Karabakh and calls for resolving this issue through diplomatic means,” the Foreign Ministry said on Monday.

In a statement, the Ministry said Lebanon’s stance is based on “the principle of nations’ regional safety and non-interference in internal affairs, in line with the U.N. Charter.”

“In this regard, Lebanon joins the U.N. secretary general in calling on the parties concerned to pacify the situation and refrain from escalation,” the statement added.

Lebanon supports “the efforts aimed at reaching a solution through diplomatic means and dialogue and welcomes the efforts of the Organization for Security and Co-operation in Europe,” the statement said.

Fierce fighting raged between Azerbaijani and Armenian forces on Monday, sparking bellicose rhetoric from regional power Turkey despite international pleas for a halt in fighting between the longtime enemies.

Armenia and Azerbaijan have been locked in a territorial dispute over the ethnic Armenian region of Nagorny Karabakh for decades, with deadly fighting flaring up earlier this year and in 2016.

The region declared its independence from Azerbaijan after a war in the early 1990s that claimed 30,000 lives but is not recognized by any country -- including Armenia -- and is still considered part of Azerbaijan by the international community.

Fighting between Muslim Azerbaijan and majority-Christian Armenia could embroil regional players such as Russia, which has a military alliance with Armenia, and Turkey, which backs Azerbaijan.

focus on the eruption of your own hostilities you illiterates