Lebanon Hits Back at Israel at U.N. Human Rights Council 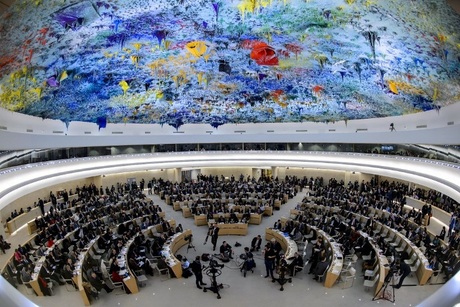 Lebanon’s permanent mission to the U.N. in Geneva on Monday responded to remarks voiced by Israel’s envoy at a session for the U.N. Human Rights Council.

In a statement, the Foreign Ministry said “the mission used its right to respond to the Israeli enemy’s envoy, as has been the case whenever there is an attack on Lebanon and its right to resistance.”

In its response, the mission described Israel as “an occupation force armed with the fiercest weapons and in possession of a nuclear arsenal with which it threatens its neighbors.”

“It has a history rife with severe human rights violations and with committing international crimes, in Lebanon and in other Arab territories that it occupied. The international community should one day carry out its duty in prosecuting the perpetrators… and today we are marking the 38th anniversary of the Sabra and Shatila massacre, one of the ugliest crimes against humanity in modern history,” the mission added.

“Lebanon stresses its right to resistance to liberate its land and defend its sovereignty, which is represented in the constitutional institutions that reflect the will of the Lebanese people, of which the Lebanese Hizbullah, one of the resistance movements, is an inseparable part,” the mission went on to say.

It also hit back at the Israeli envoy over remarks related to the August 4 explosion at Beirut port.

“The occupation force has sought to put itself in the position of the Lebanese judicial authority in the issue of the port blast, in which investigations have not yet been completed,” the mission said.

“The hypothesis of a foreign plot should not be ruled out, and in this case, this (occupation) force will be the main suspect,” the mission added.

"described Israel as “an occupation force"
Can anyone please tell us exactly what part of Lebanon is occupied by Israel.
Please don't tell us Sha'aba Farms, as both the UN and Syria specifically state that they are Syrian territory.

All three countries agree that Israel is an occupation force. The dispute is whether they occupy Syrian or Lebanese territory.

It is easy to see why Lebanon is dammed to many more decades of war, misery, and despair....it is simply unable to look inside and purge it's own demons like Hezbollah and rampant corruption, so instead it lashes out at it's neighbor Israel. But Israel's wish is to see peace, stability and prosperity for their northern neighbor Lebanon, Israel is not seeking conflicts.

The shear double standard and hypocrisy coming from our Lebanese ‘Representative’... more aptly Hizbollah Representative protecting the Iranian and Syrian elements of occupation and duress of our Lebanon!

If Israel was bad to us, Iran and syria have being worse!!! Or as bad!
... no! ... considering the length of time we have being under their tutelage ... Worse! The scum have surpassed the Zionest crimes by Far!

Blatant lies from Lebanese mission.. Hizbullah is Iranian.. not Lebanese

God bless Iran's permanent mission to the U.N. in Geneva for standing up to the zionist enemy and its brutal practices against human rights.

''the Lebanese Hizbullah, one of the resistance movements, is an inseparable part,”
Is this a joke ?