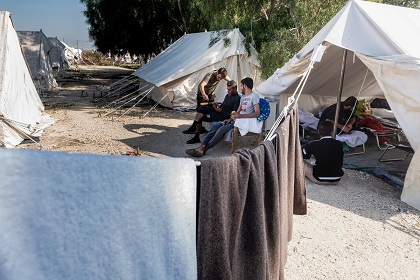 Cypriot authorities pushed back 200 migrants and refugees arriving from Lebanon aboard boats earlier this month, ignoring their claims for asylum while in some instances using violence and coercive tactics, a human rights watchdog said on Tuesday.

Human Rights Watch accused Cypriot marine police officers of beating some migrants and making threats. The group said coast guard vessels attempted to swamp migrant boats by circling them at high speed and abandoned at least one boat at sea without food or fuel.

The watchdog said the accusations come from interviews with 15 Lebanese and Syrian nationals who tried to reach European Union member Cyprus after setting sail from Tripoli, Lebanon, aboard seven boats between Aug. 29 and Sept. 7.

According to Human Rights Watch, witnesses and victims on two boats returned to Lebanon said that Cyprus marine police handcuffed and beat individuals who resisted being returned.

The watchdog quoted one Lebanese national identified only by his first name who accused Cypriot police of using a cattle prod on him aboard a boat on Sept. 6 after he shouted at them to rescue a couple who jumped overboard.

The watchdog urged Cypriot judicial authorities to carry out an investigation into the allegations and prosecute anyone found to have committed any wrongdoing.

It said the European Commission should get Cyprus to respect the right of migrants to seek asylum and to not return people to a place where their safety and freedom may be at risk.

"People who risk their lives and their children's lives by fleeing Lebanon by boat do so when they are truly desperate," Human Right Watch official Bill Frelick said. "They have a right to have their claims for international protection considered."

Cypriot officials did not immediately return calls for comment on the report.

The Cypriot government has said the ethnically split island nation is willing to offer safe haven to refugees, but has reached its limits in accepting "economic migrants." Interior Minister Nicos Nouris said earlier this month that the Cypriot government is coordinating with Lebanese authorities to take back migrants arriving from that country in line with international law.

And we expeced them to meet these people with red roses? yes the Cypriots unlike the Lebanese love their island nation and will go to all lengths to protect it. Conversly Lebanon has ushered in every refugee from the globe to not only come in but run the place.