Amal Hits Back at Macron, Voices Support for French Initiative 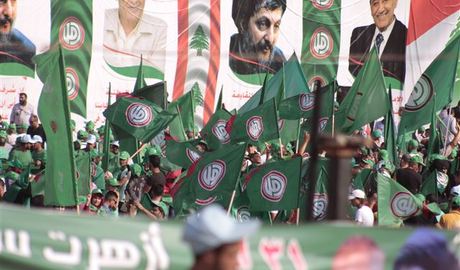 The Amal Movement on Tuesday snapped back at French President Emmanuel Macron over his latest admonishing remarks, while reiterating its support for the French initiative.

“The Movement maintains its stance, which is committed to and supportive of this text that reflects a national need in addition to the importance of foreign care and support for it,” the Movement’s political bureau said in a statement, referring to the text of the French initiative.

It noted that the Movement’s stance on Mustafa Adib’s designation to form a new government was “clear in supporting the formation of a capable and strong government comprising the best competencies and specialists and abiding by the reform program.”

“Its stance during the formation negotiations was in line with the democratic norms that respect the stances of political blocs and do not disavow the results of parliamentary elections,” it added.

In an apparent jab at ex-PMs Saad Hariri, Najib Miqati, Fouad Saniora and Tammam Salam, the Movement said some “usurped the formation process from the PM-designate, violated the democratic norms and put conditions and rules related to the rotation and distribution of portfolios that serve their own interests.”

“They disregarded the truth of the French initiative and exploited it to establish a new approach in the formation of governments,” the Amal Movement charged.

Commenting on Macron’s sharp-toned remarks against Amal and its ally Hizbullah, the Movement said it respects the role that the French president has played but deplores his accusations that came “distant from facts and the actual discussions with the PM-designate.”

The Movement also said that is strongly rejects “the accusations that were addressed to all parties as to benefiting from and taking funds,” saying such allegations “contradict with the fact that the Movement is leading calls for accountability, inspection and the approval of laws pertaining to that.”

I am glad Macron called them by name as now you see the reaction. Maybe someone leeann needs to learn this lesson when you get on a tv show and they ask you to name names of who what where, spell it out infront of the public.

On another note, Naharnet, most likely deleted a post I made yesterday. I did not know you were in the business of censorship.

Berri is the biggest phony in Lebanese politics. While Musa Sadr was an honest and visionary political giant belonging to a handful of leaders who cared about uplifting their community in cooperation with others, Berri is the opposite in every way. Whereas Sadr build, Berri froze and destroy. Whereas Sadr worked hard to serve and unite, Berri is here to be served. Whereas Sadr understood and cherished the uniqueness of Lebanon democracy and freedom (lacking in Iran where he was born), Berri make deal with Hizb's arms destroying any hope democracy, sovereignty and investments. Sadr in 2010 would have been a leader of the Green Revolution, whereas Berri and Hisb represent the oppressive Lebanese basij. Amal has been transformed to misery and despair.