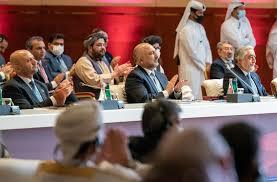 The Afghan government and Taliban negotiators are nearing a compromise on a key sticking point that has stalled peace talks in Doha, a senior Afghan official said Wednesday.

Talks started in the Qatari capital on September 12, but an optimistic beginning was marred by ongoing violence and discussions got bogged down by disagreements over which interpretation of Islam should be used to frame laws in a post-conflict Afghanistan.

The Taliban, who are Sunni hardliners, had insisted on strict adherence to the Hanafi school of Sunni Islamic jurisprudence, but government negotiators worried this could be used to discriminate against the predominantly Shi'ite Hazara community and other religious minorities.

Abdullah Abdullah, chairman of Afghanistan's High Council for National Reconciliation that is overseeing Kabul's peace push, said in an interview with AFP that after several small-group meetings in Doha, the issue had been resolved "to a large extent".

Both sides have provisionally agreed "to recognize the principal issue of Hanafi's role without any discrimination to Shia communities or minorities, so … the compromise is around that," Abdullah said.

Resolution of the issue means one less obstacle as negotiators try to draw up an agenda for talks, which could take years to complete.

Another stumbling block has emerged: the extent to which the Taliban recognize the legitimacy of the Kabul government under a future deal.

The insurgents have always insisted President Ashraf Ghani's government is a US-enabled "puppet" regime. In the deal the Taliban cut with Washington in February, they did not have to recognize Kabul.

Similarly, the Taliban now want any future peace deal to exclude overt references to the government and instead to frame the agreement as some sort of "intra-Afghan" accord.

Without providing details, Abdullah said the two sides appeared to have made progress on the issue.

He said after a slow start, the negotiating teams were now "getting along quite well and this latest impasse, hopefully we will overcome it soon."

Abdullah was speaking in Islamabad as he finished a three-day visit to Pakistan.

The South Asian nation has had dismal relations with neighboring Afghanistan, with Kabul frequently accusing Islamabad of harboring Taliban fighters and funding the insurgency.

Pakistan denies such support, but has said its influence over the Taliban encouraged the insurgents to hold talks with Washington, which paved the way for current peace talks.

"I leave Pakistan with positive feelings and positive senses," Abdullah said, adding he had asked Pakistani authorities to tell the Taliban to reduce violence, which is flaring across Afghanistan as the Taliban refuse to entertain a ceasefire.

"My sense was this would be communicated publicly and in other ways," he said.

Meanwhile Zalmay Khalilzad, the U.S. envoy who brokered Washington's deal with the Taliban in February, was due to arrive in Doha later Wednesday to "express U.S. support for a negotiated settlement that brings an end to 40 years of war," the U.S. State Department said.